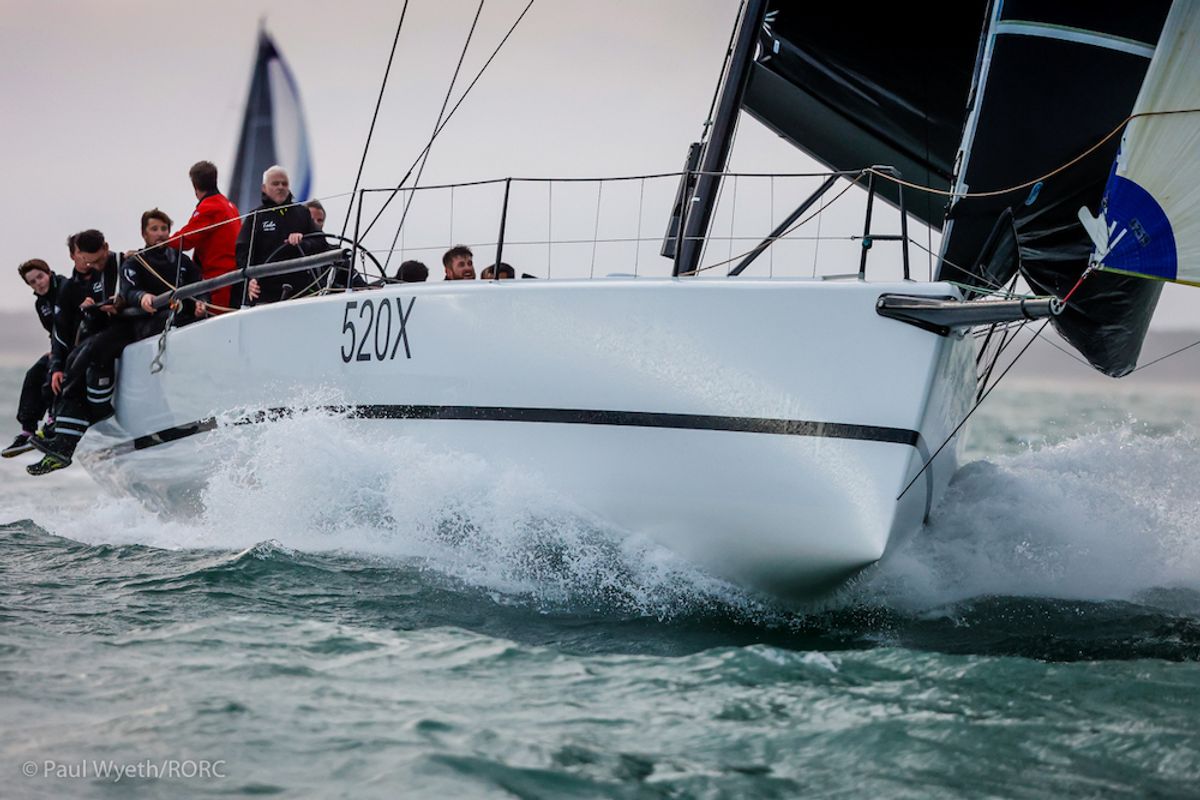 The Army Association’s Sun Fast 3600 Fujitsu British Soldier was the winner of IRC Three and fourth overall. Andrew Hall’s Lombard 46 Pata Negra was the winner of IRC One. Sam Goodchild’s Multi 50 Leyton was first to finish, taking just 7 hours and 23 minutes to complete the 91nm course. Greg Leonard’s Kite was the Class40 winner.

Once the shorter course was announced, our routing showed it to be much more favourable for us in terms of the tidal gates,” commented Tala’s Pete Redmond. “The beat against the tide worked in our favour against the boats in our class, as well as the smaller boats. Once Tala got around St. Cats and out of the really strong tide, we also had a favourable wind shift. Tala has had a really good season, David (Collins) is really happy. In a fleet with a massive range of IRC Ratings, and a lot of tidal gates in home waters, you don’t always get the best conditions over the season, but we have always tried to get the best result we can. Tala’s current plan for the future is the RORC Transatlantic Race and then up to Antigua for the RORC Caribbean 600. Tala has been optimised for offshore racing, but we have a lot of work planned in preparation for the RORC Transatlantic Race.”

“The Castle Rock Race was a bit of a mission,” commented Ross Applebey referring to the 40 tacks in a five-mile stretch approaching St. Cats from the east. “It was full-on, but quite good fun! If we had an infinite amount of energy, we would have done a few more! We really worked hard upwind which put us in a good position.” Downwind Scarlet Oyster made a big gain with their symmetrical kite, as Ross explains. “We went inshore at The Shingles with our pole, temporarily we had five knots of tide against us, which was a bit alarming, but it set us up to get inshore and the advantage of the back eddy to St. Cats. In relatively flat water we gybed out to pass St. Cats and put up our big new kite and we were really rocking with that. Looking to the future, with the permission of my wife and daughter, we hope to enter the RORC Transatlantic Race, and we do have some spaces available for sailors with the right experience.”

“We are really pleased with our class win but a bit frustrated that we were fourth overall by just five minutes,” commented Henry Foster, skipper of Fujitsu British Soldier. “We had a cracking race with some very well sailed Two-Handed teams, hats off to Bellino, Tigris and Diablo, it was a hard race but good fun. To get third in class for the season is really pleasing, especially as we have had a development team on board for a number of races. For 2022, we are looking at racing Round Ireland and Cork Week, but the big focus as ever, will be the Sevenstar Round Britain and Ireland Race. Personally, I will not be on the boat for that race, but we have Phil Caswell and Wil Naylor who have done about ten races between them.”

Duff Lite was the winner of the RORC Trophy. Shortgood was runner up and  Tim Goodhew & Kelvin Matthews, racing Nigel Goodhew’s Sun Fast 3200 Cora, was third.

“I asked Alex (Piatti) how many tacks we did, and he replied – too many!” commented Duff Lite’s Gavin Doyle. “If we are going inshore, we like to be the guys that go in the furthest and get the most out of it. We are absolutely delighted with the result. This is our first season with the boat, next up will be the IRC Two-Handed Championship, and we are looking forward to a head-to-head with another Corby 25 in the Hamble Winter Series.”

There was something of an end of term party atmosphere after the Castle Rock Race with a Race Prizegiving and BBQ hosted at the RORC Cowes Clubhouse. The RORC Annual Dinner, a spectacular black-tie awards ceremony for the RORC Season's Points Championship, will be taking place on Saturday, 27th November at the Intercontinental Park Lane, London.