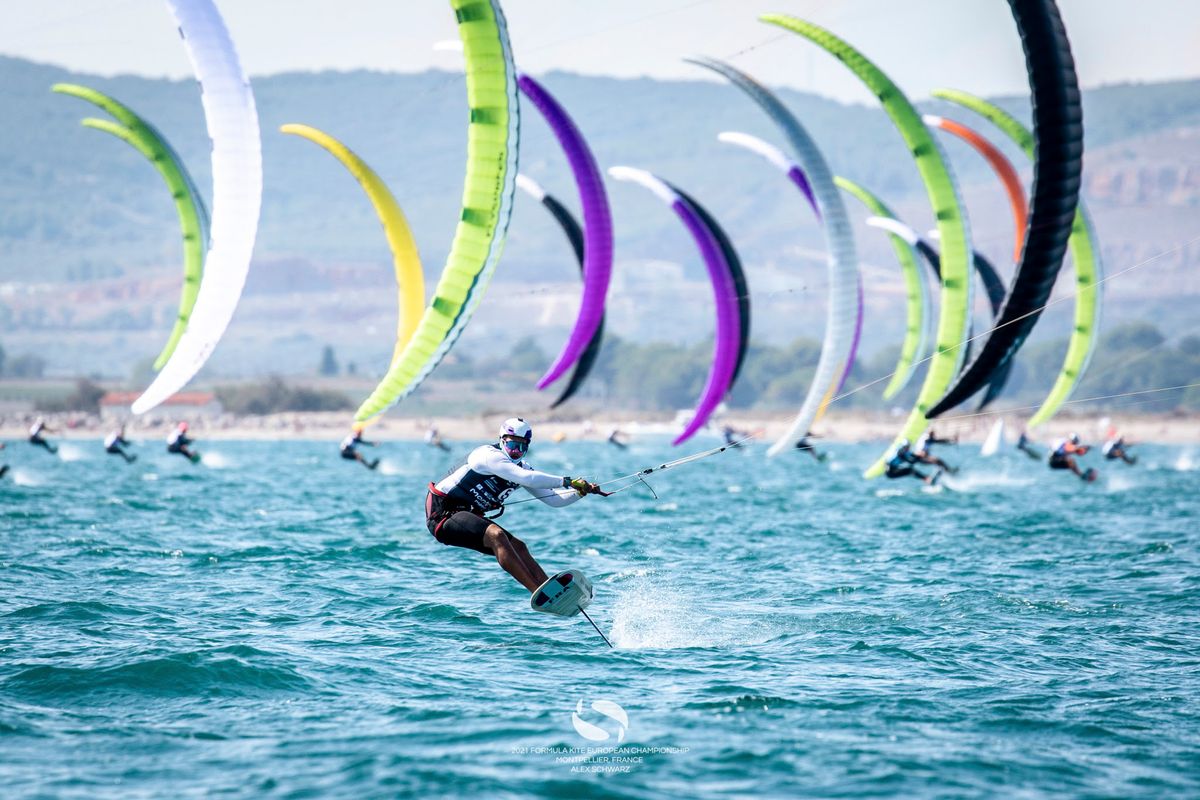 on home waters in Montpellier

Three Frenchmen locked out the top of the rankings with searingly-fast kiteboard foil racing on the penultimate day of the Formula Kite European Championships off Montpellier’s Villeneuve Lès-Maguelone beach, when it was all about booking a place in the final race.

Benoît Gomez (FRA) did that in style, climbing three places up the rankings to qualify directly to the finals, to be sailed on the fifth and last day of Europeans, with a scintillating performance of two bullets and a second place in the day’s four races.

In the 9kts breezes at the start of proceedings, he feared that his 21m kite, the largest he registered, would be too small for his 110kgs frame. But in the day’s second race he was forced to tack just before the line and make a risky port start. He caught a lift and better pressure on the right of the course that gave him the edge. He replicated the port start to his advantage in each successive race.

“I’m really happy,” said Gomez. “Every race was so exciting, even though I thought I was a bit underpowered at first. Now I have a great position going into the final day.”

Reigning European champion, Axel Mazella, aiming to take his third successive crown, moves to the final day in pole position, after holding on his overall lead with a bullet and a second place in champagne foiling conditions of 13kts south-westerly breeze, on flat water under cloudless skies.

But he considered his last two races below par. He is determined to stay positive though, despite the pressure heaped on himself by his desire to bag a hat-trick of titles.

“I really want to win three titles in a row,” said Mazella. “But my aim is to try to focus on the next race, and not think about the title. I’m concentrating on thinking about doing the best I can, and if I don’t win the title, at least I did my best.”

While Mazella and Gomez will sail directly in the final of the medal series, the third Frenchman, past world champion Maxime Nocher, will have to prevail in a shootout of semi-finals to secure a place in the finals on the ultimate day of the championship.

In the women’s Gold fleet, racing alternately with the men, USA’s Daniela Moroz was as imperious as ever. The four-times Formula Kite world champion took four bullets, seeing off increasingly stiff challenges from the strong French team and qualifying directly to the final.

But for once Moroz did not have it all her own way. In several of her day’s initial races she was second to the first top mark, only to overhaul her rivals on the downwind legs with superior speed on her 21m Flysurfer VMG2 kite.

France’s Lauriane Nolot tangled with Britain’s Ellie Aldridge at the top mark that both had misjudged and underlaid, ending their day’s last race. Still, Nolot retained her second place in the rankings and joins Moroz in the final, while Aldridge will have to face Poema Newland (FRA) and defending European champion, Poland’s Julia Damasiewicz, 16, in the semi-final for a chance to win a medal.

Nolot, a relative newcomer among the fleet of 40 women and 91 men from 29 countries and five continents, was delighted by her performance, despite her error.

“I’m super-happy, it was a great day,” said the 22-year-old. “I really thought I had got the better of Daniela Moroz in one race. I was well ahead of her at one stage but somehow she managed to arrive under me at the downwind mark.”

Aldridge, riding her 21m F-one Diablo V5, reckoned in retrospect she should have switched down to a 15m kite as the breeze built in her day’s third race. Rivals on smaller kites were able to pass her on the track.

“What was interesting was the incredibly tight battles between the top five,” said Aldridge, a past European champion. “Even though I’m third overall, it’s still going to be really difficult to get though the semi-final to progress. Still, I had a good day.”