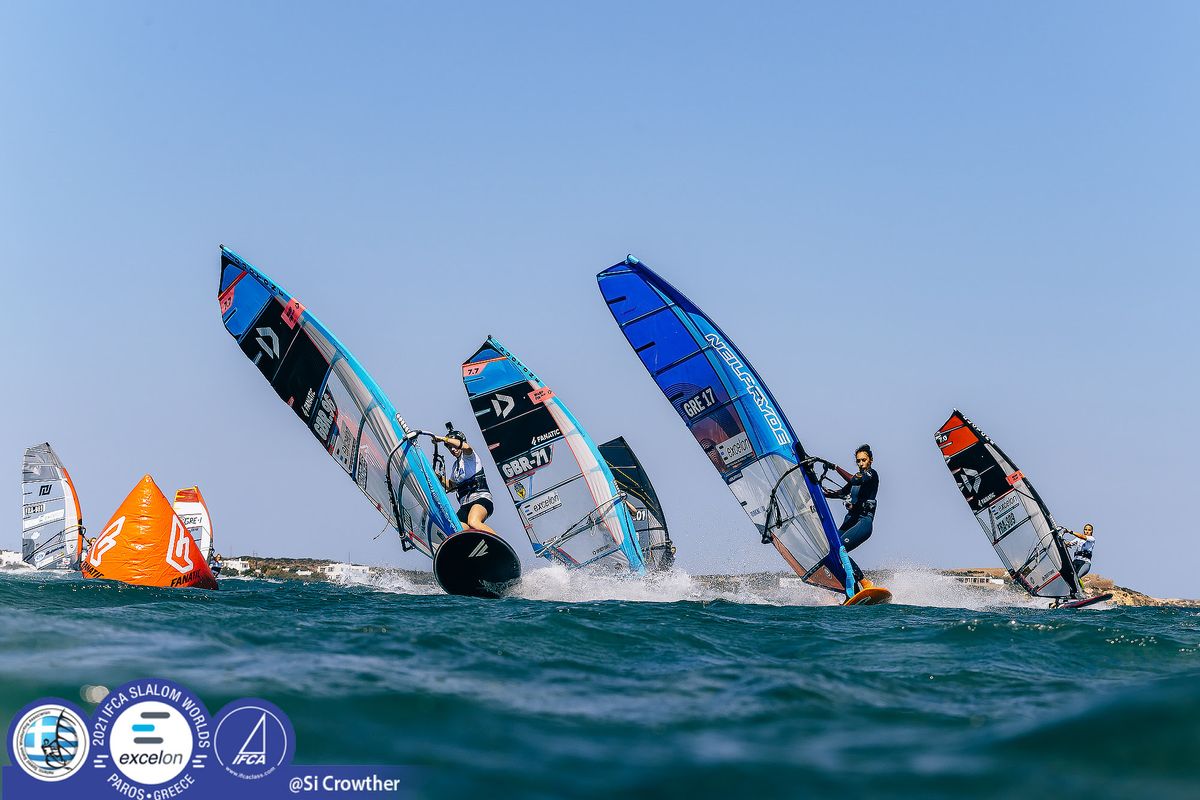 With almost no slalom events this season and the not so easy traveling circumstances, Paros,Greece,  has now made its stamp as a world class slalom destination after producing outstanding racing conditions throughout the entire event from light to medium to strong and super strong winds. All of this with thanks to the great sponsors such as to Excelon, The South Aegean Prefecture, Paros Island Local Municipality, the amazing organization group at the Hellenic Speed and Slalom Windsurfing Association HSSWA, Paros Kite Center, “Selina” Holiday Sun Hotel., Blue Star Ferries and all the additional sponsors involved.

In the women’s division it became quite certain that the fast British Jenna Gibson was the strongest among the women by winning 24 out of the 27 races sailed. Her teammate Sarah Jackson managed to keep second with a pretty consistent performance during the races. The third position went to Olivia Rosique from France and is now a name to remember among the top female slalom racers while the 2019 slalom European female champion Tuesday Lou-Judd from France struggled to get her act together, as she managed to finish this event with a deserved fourth position.

The men’s division saw some top names, young windsurfers and masters which caused some tough battles. At the beginning it looked as if the Italian Bruno Martini was going to hold on as the leader during the first few days of the competition. During the following racing days the top positions started shifting up while some struggled to find their phace as daily conditions changed which made choosing the correct equipment set up an important one. The competitors sailed in a knock out system of qualifying heats and only the top best would then advance all the way towards the winners final which is the main battle of a single elimination and decides the top 8 result listings for that elimination.

With only 3 discards given and a total of 10 eliminations sailed it was all about consistency and stamina. Since many have not been able to properly train during the preseason things got quite intense for most of the competitors during the long days of racing here in Paros, Greece.

Basile Jacquin received (THE MOST VALUABLE PLAYER) MVP status during this event with his strong come back performance and finally on the last racing day securing the third podium slot. Malte Reuscher, Maciek Rutkowski and Bruno Martini all had close points and managed to win a couple of heats including the A finals. The Dutch Jordy Vonk was the one who kept it all smooth by always advancing and securing a spot into the A finals, finishing among the top 4 at all times including a bullet in elimination #4 which paid off after the 3rd discard and is now happily crowned Vice Slalom World Champion.

Croatia’s Enrico Marotti the fastest in a mixture of conditions throughout the event, focused and strong as he took the lead after the 4th elimination and managed to keep the pressure and tension away by sailing clean and smooth through all the heats, while among the top athletes it was all very close until the very last races of the event. The Croatian is now crowned as the rightful 2021 Slalom World Champion making him now a Multiple World Champion in the discipline of Slalom Windsurfing.

Paros has left us with great memories, soared muscles and a fantastic windsurfing experience. The Class plans to return to this amazingly beautiful spot and hopes to crown more future champions here in Paros. Next up are the JYM Slalom Europeans in Austria followed by the Men & Women Slalom Europeans in Sardinia, Italy.