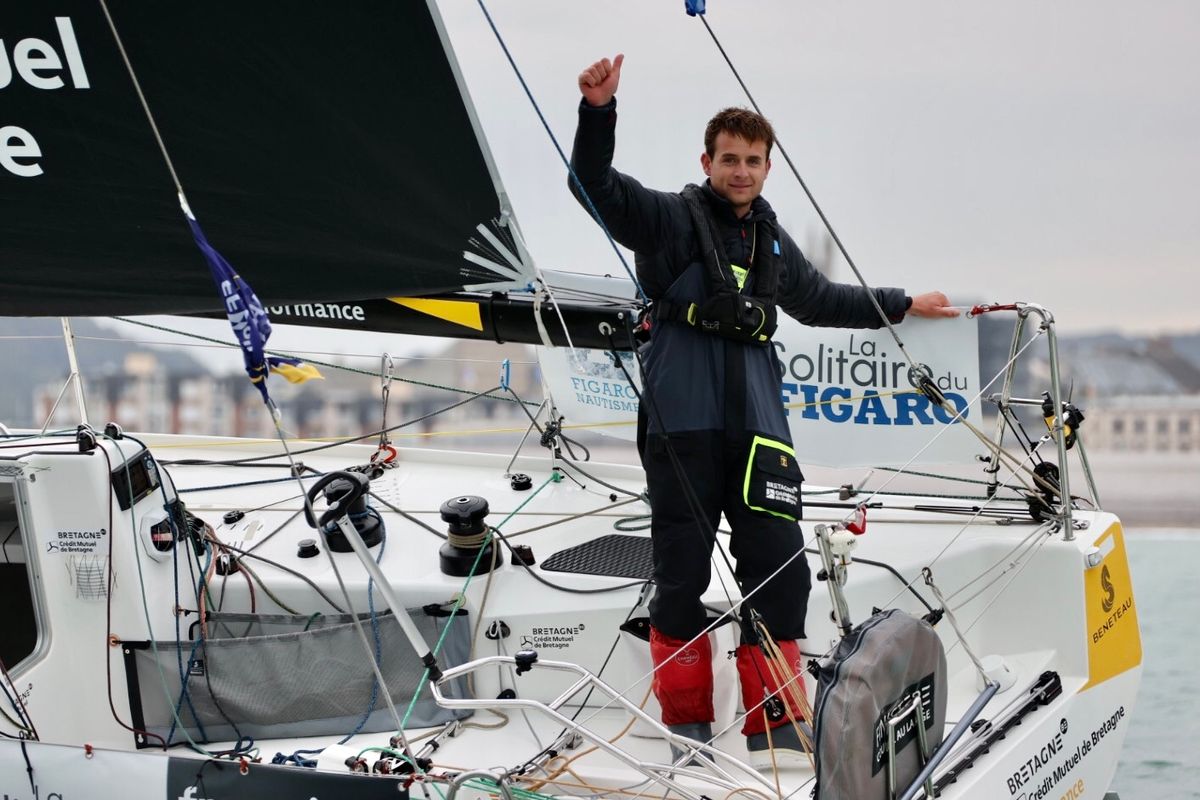 Pierre Quiroga (Skipper MACIF 2019) won the second stage of the 52nd La Solitaire du Figaro (before jury) when he crossed the finish line at 08:43:45hrs CET/Local hrs this morning, completing the 490 nautical miles coastal stage from Lorient to Fécamp via a turning mark at the Rochebonne plateau off Les Sables d’Olonne, having built himself a margin of just under four miles.

After finishing second on the 627 miles first leg, some 45 minutes and 15 seconds behind stage winner Xavier Macaire (Groupe SNEF), the 28 year old solo racer who originates from Marseille puts himself in a strong overall position.

Macaire the 40 year old sailor who Quiroga took over the helm of the Centre Entrainement de Méditerranean’s Figaro programme in 2015 caught a fish pot round his keel early on Monday night and had to dive to release it, losing touch with the leading group. He was lying 17th more than 12 miles astern when Quiroga finished.

Quiroga, a past French Olympic sailing squad sailor who raced in the Laser and the 470, takes the first stage win of his career as he competes on his sixth La Solitaire du Figaro. He finished ninth overall on the last edition of the race in 2020 and sixth in 2018.

He took the lead of the 34 strong fleet in the middle of Monday morning on a muscular, breezy close reach up the west coast of Brittany, sailing nearly a mile offshore of the lead group, passing Tom Laperche (CMB Bretagne Performance). Quiroga built his lead on the long beat to the Channel Islands when he tacked north of the group and was twice able to find a more favourable, lifted wind angle. With more than half of the stage raced upwind in NE’ly breezes of up to 20kts when boatspeeds would normally be very close, Quiroga’s performance is impressive.

“It was hard, hard, hard! I thought this leg was never going to end. What I do know is that I have now fulfilled my deal. The objective was to achieve a stage victory, and that’s it done. On the first stage I was not far off with that second place. And now, on such a complicated stage, with the currents, tacking a lot of the time, it really tested all that a sailor should know how to do. I am amazed and delighted to have won this stage in such a beautiful way!”

Asked about his choice to separate from the fleet at times, he said:
“At the start of this season, on the Solo Maître CoQ, I won (the long offshore) by going to a corner a bit on my own. Here is was a little bit the same. This is what I like to do and I wanted to have fun on this stage. I felt there was an option, the planets were aligned, I went for it and it worked out.

My overall objective on this Solitaire is still just to be in the top 5 or even a podium. That is the box ‘stage victory’ checked but I’ll keep pushing! And now I will be sailing with less pressure because my main objective is fulfilled. The general classification? I think about it, but I take everything as it comes, I will first savour this victory. Opening the course among the rocks of L’Aber Wrac’h for a guy from the Mediterranean is not easy. Clearly my 6 years of experience here have paid off.

We were burnt out on Monday. I told myself that we were going to calm things down a bit for later for Guernsey and all the islands, the Chat, the Raz Blanchard. I knew we needed to be in good shape. That night I had no e energy, I did a lot of stupid things when I got there. And here I’m burnt out. My eyes are itchy and my muscles are telling me to go to sleep. To take the lead in the Raz de Sein and the Raz Blanchard, ahead of the best Figarists, was a thrill. But it was important to stay calm and keep a lid on my emotions.

Xavier Macaire was well in the match. On my side of things I thank my boat because we did not catch a net. I snared a buoy but it quickly got released. When you rock-hop, you have to count on your lucky star, and today it is with me!”

Third on the first stage, Tom Laperche finished second across the line at 09:40:04hrs CET/Local in an elapsed time for the leg of 2d 19hrs 40m 04s and Achille Nebout (Primeo Energie-Ammaris) was third Nebout taking third gun at 09:56:23hrs for an elapsed time of 2d 19hrs 56mins 23secs. The past SB20 world champion who also started with the CEM and originates from Montpellier, ensuring that two of the top three finishers have their sailing roots in the Mediterranean.