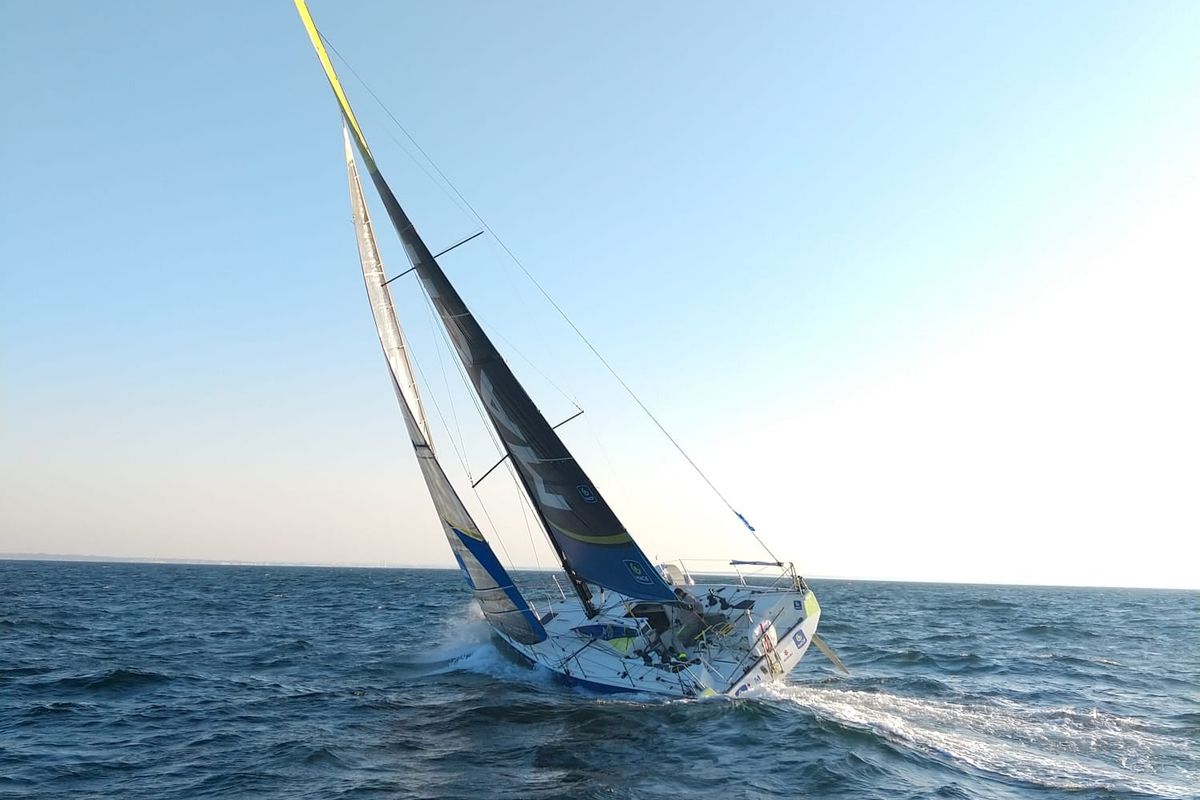 With 140 nautical miles to the Fécamp finish at just before 0900hrs CET this morning, Pierre Quiroga (Skipper MACIF 2019) has a handy lead of 2.7 nautical miles over second placed Tanguy le Turquais (Quéguiner Innovation). Working upwind he is doing a good job of keeping his nearest rivals in check on what is a technical stage of the course. It will have been a night with very little sleep at all and the skippers will be feeling the fatigue after two long nights of very intense coastal racing.

Ahead, on the menu for the morning, is the Raz Blanchard, or the Alderney Race – which separates Alderney from the Cap de la Hague and the tip of the Cotentin peninsula. High tide was at around 0400hrs this morning and so there may be a little compression of the fleet. Race leader Xavier Macaire (Groupe SNEF) has dropped to seventh at 4.6 miles behind the leader despite having had to dive last night to remove a box which had become trapped under keel. Race Direction stood by at around 2300hrs as he dropped to 15th losing about two miles on the leaders, but he is back to fifth albeit still 4.6 miles behind leader Quiroga.

Alan Roberts (Seacat Services) is still locked in with the main leading group in tenth at just on five miles behind the leader and within two or three miles of the podium.

They remain upwind in about 18-20kts of consistent North Easterly winds which should stay with them at least until the corner at Cap de La Hague where they should pass early this evening prior to the long passage across the Baie de La Seine, passing Le Havre to the finish in Fécamp where the winners should arrive tomorrow, Wednesday morning.

Reached by VHF this morning:

Tanguy Le Turquais (Quequinner-Innoveo): “The conditions are not easy with short seas. It is not very pleasant, especially since we were tacking against the current along the Breton coast. I am very tired but I try to build up some small naps. But the boat still goes faster when you’re at the helm, so you can’t let go and you have to watch for the breeze backing lef. This was the case on one side, I was able to pick up on Fabien Delahaye. I am thinking of tacking around 9 and 10 am, and heading for Guernsey. Despite everything, the fleet remains fairly compact. In my head, I try to stay in the top ten, to see then if I can catch up a few places here and there. On La Solitaire, you should never forget you have to keep going, keep going. This morning we start the last 24 hours of racing. It will be good to end this second stage, it’s really very complicated to rest! “

Pierre Quiroga (Skipper Macif 2019): “I lost a lot of people on the AIS (VHF boat geolocation system, editor’s note) I will wait until the early hours to see what I do, but I am on a bit of a northern option approaching Guernsey and the Channel Islands. In any case, I have the impression that we have done the hardest part, the most technical bit.”