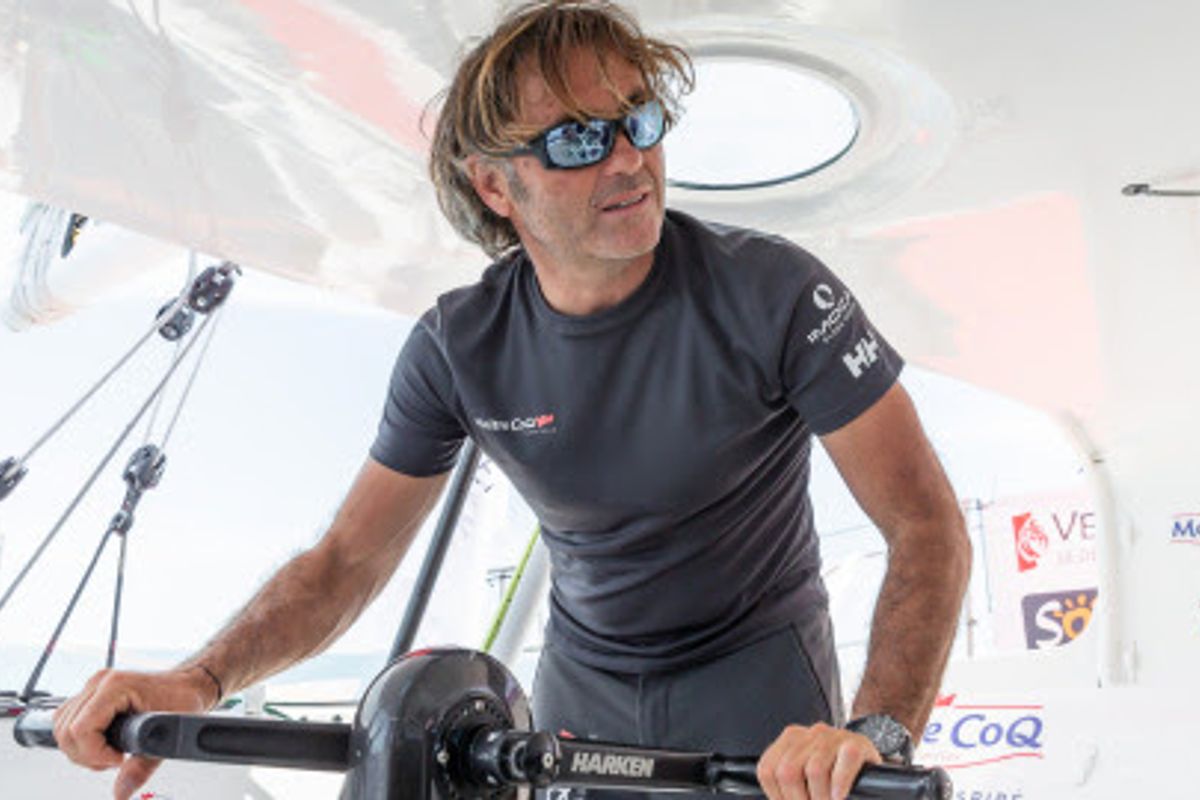 Racing 170 miles offshore of Porto Seguro, Brasil any gains are small and hard won among the leading pack of the Vendée Globe as they climb northwards in a modest 12-15kts trade wind.

Charlie Dalin (Apivia) has managed to be consistently slightly faster than second placed Louis Burton (Bureau Vallée 2) and his now 20 miles ahead of the skipper from Saint Malo who is racing the boat which won the last Vendée Globe in January 2017.

Burton is to leeward and just astern of the yellow hulled Guillaume Verdier design which Dalin is racing while third placed Yannick Bestaven (Maître Coq IV) is inshore. The leading trio are progressing all the time into slightly stronger wind which is allowing them to stretch slowly but steadily ahead of the rest of the group. In fourth Thomas Ruyant (LinkedOut) is not matching the leaders’ pace with his truncated foil and is six miles behind Bestaven in terms of DTF.

On the call to Race HQ Bestaven reports this morning,
“The trade winds are weak in general there are 12 13 knots but they are peppered with squalls and you accelerate then slow and so there is a lot of trimming and adjustments to go well and maintain your averages you have to be on it.  You have to be ready to ease the mainsail as it gets up to 18 knots, it varies from 10 to 18kts and at TWA 50 ° in direction, you had better be ready to deal with it.”

He continues, “I sleep and try to recover to be in good shape for the future for when I will need to be on it to really push. I go back to the bunk, as soon as it is stable, the alarms ring as soon as things change the wakes me up. Maître Coq is in great shape, all of it, it is not very complicated.”

Speaking of his losing 435 miles lead in the approaches to and in the South Atlantic convergence zone he said, “In terms of morale it is hard, that's for sure and so you have to look ahead, it's true that I had the impression of not being lucky at all I was first to be stopped and for the longest, obviously and I could not be in the east to control everyone in the east, I was stuck. They have the little offset with the sustained wind and now they are to the east. We did not have the same weather in the cold front.”

“Right now it is about getting to Recife and after that the Doldrums will pass quickly. I see about 13-14 days sailing to Les Sables d’Olonne.”

In sixth Germany’s Boris Herrmann is working hard on Seaexplorer-Yacht Club de Monaco to reduce the deficit to Damien Seguin (Groupe APICIL) who is 35 miles further offshore. All the time the wind is just on the margin for full, consistent fast foiling, the pressure being up and down with little gusty squalls.

185 miles NE of the Falklands Islands  Pip Hare is making good speeds in moderate winds now just on 100 miles behind Alan Roura whilst Jéremie Beyou has passed Arnaud Boissières to now hold 14th place but Beyou’s next ‘target’ would be 13th placed Romain Attanasio who is the best part of 1000 miles further north up the Atlantic.

Shiraishi said, “The Cape Horn is very far so we can't see it from here.It's a miracle! I cannot believe it! When my main sail ripped apart I thought it was the end. Thank to the team and thanks to everyone's supporting me I was able to come this far! Thank you very much.It's a miracle!”

Yannick Bestaven - on the morning call

Not too blessed these last few days, Yannick Bestaven isn't where he would have liked to be, but he’s still in the running. You have to put your heart into it: the squall passages take up a lot of energy from the sailors.
"The trade winds are weak, and they are strewn with squalls which accelerate or break our speed. There are around 12 or 13 knots more or less. That means we have to make a lot of adjustments in order to move forward and maintain an average speed. You have to be on top of it, ease the mainsail when it gets up to 18 knots, manage the variations from 10 to 18 knots in strength, and 50 degrees in direction. You can’t afford to be too far from the deck to manage all that. So I sleep for short periods at a time, trying to recover enough to be really on it for when I can go fast. I haven't set up the cockpit so it’s comfortable to sleep there, so I sleep in the bunk and as soon as an alarm rings I wake up. Maître CoQ IV is in great shape, everything is fine.

I look at the routing, which will take me to Les Sables d'Olonne in 13-14 days. There you have it for my long-term thinking. The strategy is to see how to negotiate Recife, with its complex zones to manage: we won't have to stay stuck to the coast, with the counter-currents, wind zones and squall passages. We could lose a lot of speed there.

Morally, it's hard, I have the impression I haven't been lucky: I was stopped first, and inevitably for the longest too. Then I couldn't gain enough in the East to keep a lead on my pursuers, and then it was much easier for them to move off in strong winds. I found myself downwind of them, without being able to get into the same wind as them, and that pissed me off.

We didn't have the same weather conditions nor the same timing in the cold front. It was better to come from behind! There's going to be another crossing later. The Doldrums will have passed fairly quickly, but there is another small barrier waiting for us in the North Atlantic.

It’s all go now to get back to Les Sables d’Olonne, we'll see what happens for this last part! The final chapter of the race is going to be interesting: there are several of us who could win, and it's something we've never seen before in the Vendée Globe".