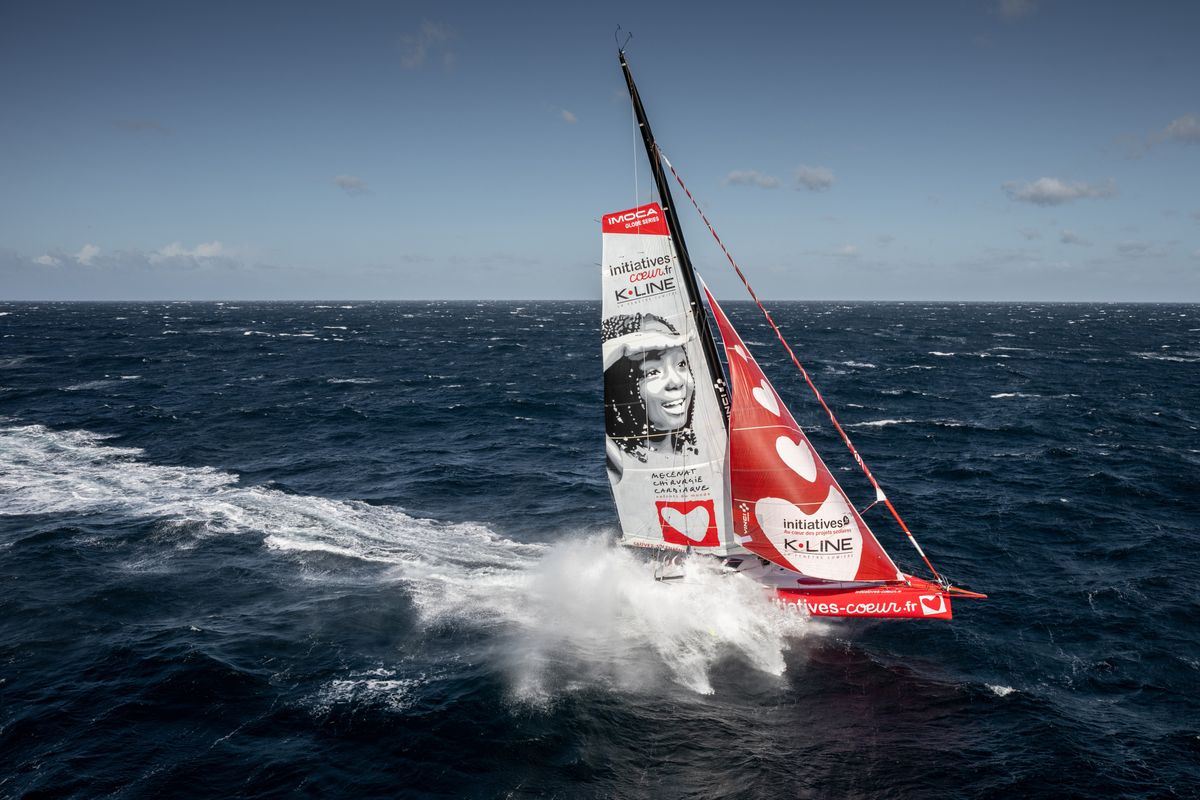 British skipper Sam Davies confirmed her retirement from the Vendée Globe today as she arrived in Cape Town, South Africa. But while the race is over for her, and she joins compatriot Alex Thomson who abandoned on arrival yesterday, Davies says she would like to finish her course unofficially and complete her adventure if her Initiatives Coeur can be repaired properly. The British duo were joined this afternoon by Frenchman Sébastien Simon (ARKEA PAPREC) who retired yesterday.

Under blue skies with Cape Town’s Table Mountain in the distance, Davies struggled to keep her emotions in check as she said "After the violence of the impact I'm relieved to be here, the harshness of what I hit. But I think that it is also the magic of the Vendée Globe: the race stops but I hope the adventure does not end here. I've always said my mission is to sail around the world on this boat. For me, but also for Initiatives-Cœur, to support cardiac surgery for the kids. If I can fix the boat and go, I'm motivated to do it. This is the positive side of the story, I still have a mast, I still have my keel! I have all the pieces and I have a great team. It will probably take time, it’s a big job but I’m very positive to give it a go as Isabelle Autissier did. I think hers is a really good example, to try to keep going anyway, I need to go back to rebuild myself."

This afternoon, Sébastien Simon (ARKEA PAPREC), who announced his retirement yesterday, moored near the other two IMOCAs  "I'm in contact with Seb, we will have a cry together and have a beer," smiled Davies.

And while the actual race maybe ends here, it is ironic that here it is where the Vendée Globe started 34 years ago. In 1986, sailors in the BOC Challenge took a seat in a bar in Cape Town and also ordered beers. Guy Bernardin, Bertie Reed and Philippe Jeantot talked of their dream to have solo non-stop race around the world. The first Vendée Globe took place three months later. In her own way, Sam Davies echoes the the story. She strengthens her desire to finish and complete her story, quoting Isabelle Autissier - who dismasted in the 1992 BOC Challenge  but repaired to become the first woman to complete a solo round-the-world circuit. She spoke too of Nick Moloney (in 2004-2005), and Enda O'Coineen (2016-2017). "I have a lot of respect for those who finish out of the race," said the sailor.

Passing the baton Sam Davies wished the best to her friend and rival Isabelle Joschke, revealing today that the hard driving Franco-German sailor came close to hitting her not long after Davies was stopped after her collision. “My thoughts are also for Isabelle Joschke. When I hit my UFO I was at a standstill, stationary and I had collision alarms sounding. It was Isa Joschke who was coming right at me right, that was a second fright, I was afraid she wouldn't see me. I had a quick, stress call with her about avoiding me. I'm super happy for her because she's having a really good race. We were really, close to each other, she made a nice comeback. And so I am happy for her because she's normally one of my racing colleagues. Come on Isa, I'm completely with you! "

Joschke spoke on the French live show today. Now in ninth she has really found an attacking rhythm on MACSF and had caught up many miles lost to Davies after taking time to get into the race after losing the pushpit off the back of her boat. The boat was originally built in 2007 as Safran for Marc Guillemot and to which project manager Alain Gautier added foils last year. Originally a successful Mini 650 class and Figaro racer, Joschke only came to the IMOCA class in 2018 when Gautier brought her in as skipper of the project, long since having recognised her talent in Generali colours on the Figaro circuit, and embracing the idea of working with a talented female skipper such as he did as a consultant to Ellen MacArthur’s Kingfisher project leading up to the 2000 Vendée Globe.

Facing the camera Joschke looked stoic, talking succinctly despite the big swell attacking her boat. It seems like each new day in the south she surpasses herself. "The last 48 hours were hellish, the sea difficult and the wind very unstable," she said as her boat sat on the edge of control in the very gusty conditions. But she maintains high average speeds and is chasing Boris Herrmann (SeaExplorer-Yacht Club de Monaco) who is over 100 miles to the north and exactly 40 miles ahead this afternoon.

And while Joschke is very much taking on Davies’ mantle, so also in Clarisse Cremer on Banque Populaire X in 13th position, who grows in confidence every day.
“This week I have had the impression of feeling at home, at one with my boat and that this is my life. Being at sea now is my life and is of my daily living. I am really making the most of this amazing place and it has taken me time, to have a rhythm and I feel great. It has taken me nearly three weeks to get the measure of what I am trying to do.  I am very disappointed for my friend Sam and also for Seb. It is always very hard seeing others abandon because you know what it represents. Sam was sailing with great prudence and really well and so hard. That is the harsh reality of the Vendée Globe.”

At the front of the fleet Charlie Dalin has restored his lead to over 200 miles ahead of Thomas Ruyant with Louis Burton now in third after experiencing autopilot problems during the night on his Bureau Vallée 2. The conditions in the Indian Ocean continue to be very tough.

Every time I tried to put more sail up, I end up with big nose dives. In terms of wind, it ranges from between 30 to over 40 knots at times. I’ve had quite a bit of wind for a while now and it's not going to stop any time soon. But I've picked up my 'strong wind' rhythm. I managed to sleep well last night. For the last few days, I’ve had a little trouble eating, but I'm feeling better now. I'm starting to get used to the life in the Indian Ocean. I had a temporary setback yesterday, but I'm back in great shape. I can trim the boat, I know what wind angle I need to sail at, I've got into my Indian Ocean routine. The worry is the crossed sea. The wind alternates between South-West and North-West, so you sail at right angles to the swell. So as soon as you catch a wave, you end up nose diving and every time you start the surf you just clench and hold on. But I compromise a lot; manoeuvres take time, they come at a price, so it has to be for an advantage. Yesterday, I got caught out. It had got a bit lighter and I put up more sail and then the wind picked up and I had wipe out. There is still a long way to go. I am waiting for the wind shift (to the west) tomorrow night. It will allow me to gybe towards a new front approaching me and if all goes well, it is a gybe that could take us as far as Cape Leeuwin. If the timing is right, if I manage to keep up the pace, before the end of the weekend I'll be on port tack, a direct course towards the next cape. Yes, I'm in the lead, but there are still so many miles to go, so many things can happen... everything in its own time, I'm taking each weather system one after the other....