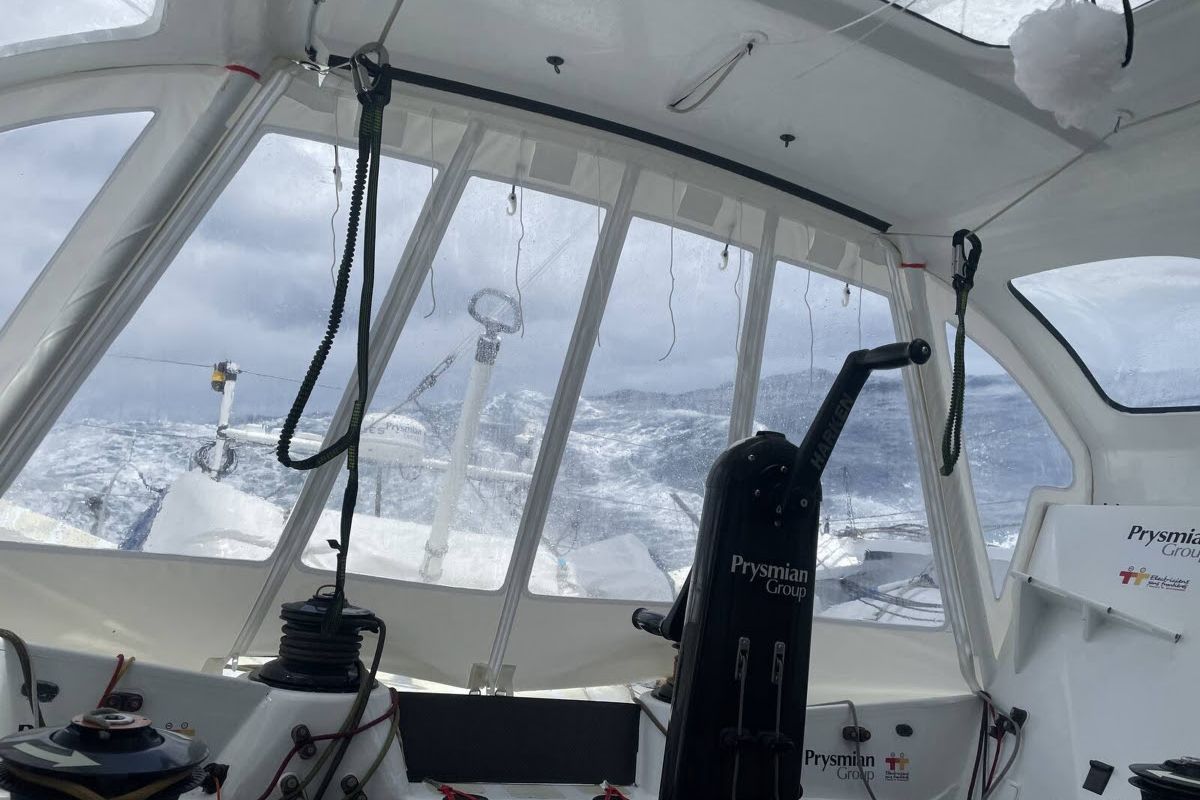 Image:  Photo sent from aboard the boat Prysmian Group during the Vendee Globe sailing race on December 4, 2020. (Photo by skipper Giancarlo Pedote)

Dalin solid, metronomic at the front

Each edition of the Vendée Globe, Cape Town, South Africa provides final safe haven for stricken solo racers to retire to, restore their mental equilibrium, to reflect on what should have been and to enjoy the safety and security of terra firma after nursing an injured IMOCA to port.

After nearly seven days and 1,800 miles since he announced his hopes of winning the 2020 Vendée Globe had been terminated by a broken starboard rudder, Alex Thomson arrived in Cape Town this morning. He will be joined over the weekend by the young Vendéen skipper, Sébastien Simon, who also announced he has had to give up the race because of damage to his starboard foil casing and his foil on the Juan K designed ARKEA PAPREC.

Of the 33 IMOCAs which started the race, four have now officially abandoned, CORUM L’Épargne, PRB, HUGO BOSS and ARKEA PAPREC.

Thomson said, “I’m still coming to terms with what’s happened, and I’m obviously utterly devastated that this is how the race has ended for us.”

“But, as I’ve said before, it’s in our toughest moments that we find our greatest strength. Now we have to pick ourselves up and move forwards, and I’ve no doubt that we can do that together as a team. Over the past week or so we’ve been reminded of just how difficult this race is. I’ve said it time and time again but there really is no sporting challenge in the world as tough as the Vendée Globe. I have such admiration for any skipper who takes on this race. My thoughts go out to those who, like us, have had their races cut short. And I wish the remaining skippers a safe passage and a good race. I’ll be watching closely.”

The British skipper has been forced into Cape Town in early December before. His first Vendée Globe ended with his retiral on 7th December 2004 after an area of his coachroof around the mast gave way due to a structural problem. And in 2006 he and Mike Golding arrived in Cape Town on December 3rd 2006 after Golding had dramatically rescued Thomson from his IMOCA in the Southern Ocean after he had to abandon it because his keel had failed. Golding’s mast broke not long after the rescue and the pair had to sail 1000 miles north under jury rig.

Britain’s Sam Davies is making steady progress north under reduced sail nursing her damaged Initiatives Coeur back to sheltered waters and this afternoon was about 80 miles south of Cape Town. After the best sleep since she hit a floating object which has damaged the structure round her keel, Davies admitted that the emotions were suddenly released as she was accompanied on her route by an albatross, “The sun came out too which helps to ease the aches and pains - I went and sat outside in the warm sun. And then suddenly found myself in floods of tears - and this is a bit weird for me, who never cries, to deal with all these emotions. I wasn’t even sure why I was crying - whether it was sadness for my boat and for my place in this race, or relief that my boat and I are safe? Or a mix of all these emotions? I’ve always felt that it’s stupid to cry when you are alone on your boat - nobody’s going to help you or hug you or reassure you so it’s pretty much a waste of time and energy. But at that particular moment I had no control over these emotions. I leant on the coach roof and looked out and there, right there, really close, unusually close, was the most beautiful albatross I have seen, gliding past silently and slowly. He was so close. Normally the albatrosses keep their distance but this was different, as if he could feel my emotion and wanted to help. He stayed close and gave me a wonderful display of effortless flight that was a welcome distraction. They say that albatrosses have the souls of sailors of the past and I can well believe that. I feel like I am being escorted to safety by these amazing creatures and I am grateful for their concern!”

Meantime, yesterday night, Romain Attanasio (Pure-Best Western), Davies’ partner was nervously crossing the exact same zone where she had her collision two days ago and where four years ago he hit something which damaged his rudder, requiring him to repair at anchor off Port Elizabeth.

“I am fully in the zone where Sam and Seb hit their OFNIs and it is exactly the same area as I did four years ago, the same spot same latitude, same longitude it is in the Agulhas current, there are all sorts of things in the water, objects, it is a zone which is a bit critical. I am reaching in quite a big sea and so I am on high alert. I have my eyes on OSCAR as much as possible, this camera system that surveys the route. You can’t see much in the water on the surface. So, it is not easy all this.” said Attanasio.

Conditions are still demanding for the fleet leaders who will shortly be able to angle more to the south east after passing the corner of the Antarctic Exclusion Zone. Led by Charlie Dalin (Apivia) with Louis Burton now just 140 miles behind on Bureau Vallée, they are still all struggling to set a good average speed in the typically big seas and gusty winds. A second, deeper low pressure is set to combine next week to provide very testing conditions which it is most likely the leaders will change their route to avoid.

Louis Burton’s attacking force seems relentless, his wife Servane noting today on the Vendée Live English programme, “Louis never stops surprising me, but he has a mind of steel. When he went south he asked me, ‘will you still love me if I screw up?’

"After two days of sailing ahead of the front, it seems to have passed now and now that the wind is changing and giving me a chance to relax. It's a good start for the Roaring Forties, the boat is going fast. I trust it despite the sudden movements, the waves passing over it and the thousands of other noises that one hopes are nothing serious.

It's been an incredible feeling to go from "summer" sailing to this wet environment, with little visibility and cold (although not so much for now). The tension on doing those first surfs is easing because everything is fine, I can go fast knowing that all is good on the boat. It's a luxury and you have to take advantage of it!

It was a good start to this South Sea passage, which should last at least 4 weeks. Let’s see!"

Didac Costa / One Planet One Ocean
"

"I love being on the sea in this world and to live like this in this wild and natural world. It is so inspiring and enriching and I try and transmit this in my messages.

I am eating a lot at sea because the manoeuvres demand a lot of energy; just doing a mainsail change takes three quarters of an hour and you really use up a lot of calories. You also need to hydrate yourself properly and it is like sleep, it is one of the essential things you need to manage well.

Being ahead of the front like this means the sea state is quite manageable the boat can go fast. This would usually be only an option for multihulls, but now these boats with foils can go really fast, it is quite amazing just how fast they can go. We are averaging over 20 knots and whilst the sea state is great, you can’t really go out on deck; there are waves constantly washing over the boat, but it is very manageable compared to what my colleagues have been through or are going through up ahead of me"