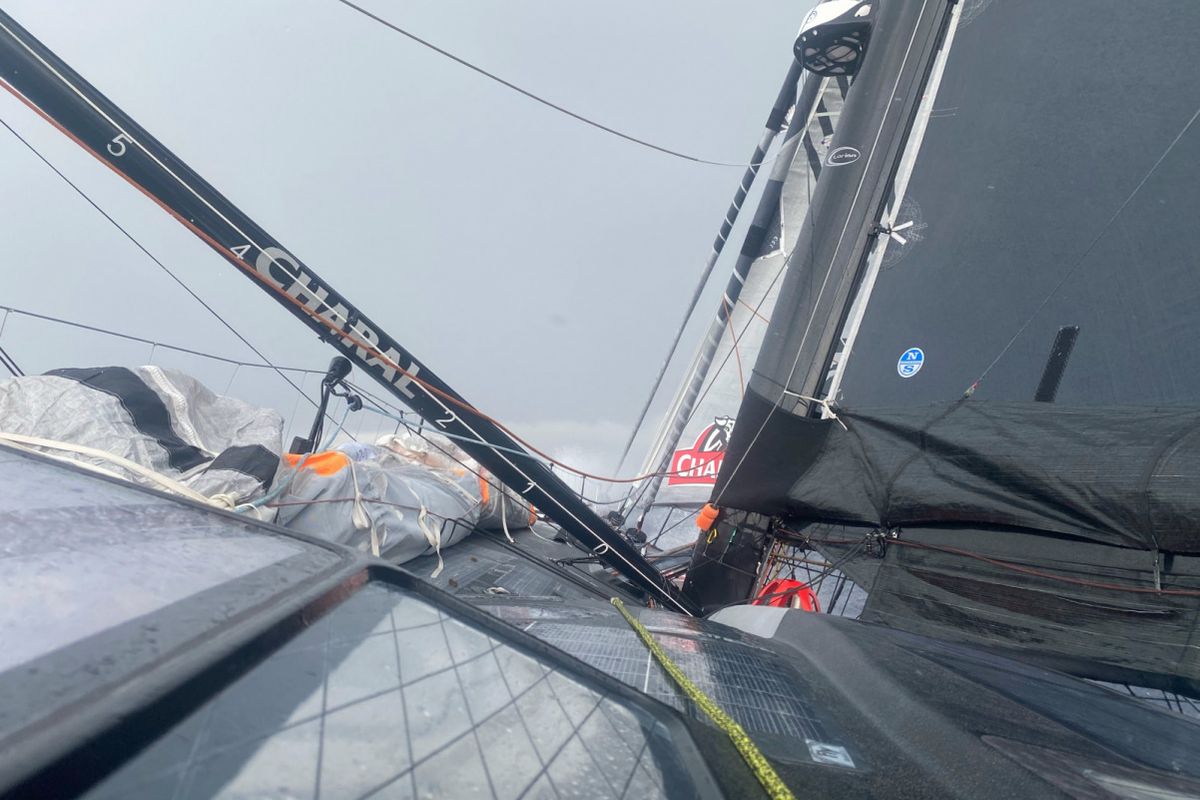 Image:  Crossing the doldums for Charal

Charlie Dalin, the Vendée Globe race leader, should pass the longitude of the Cape of Good Hope on Monday, the first of the mythical 24,296 nautical miles solo round the world’s three Great Capes. That his elapsed time since the race started in Les Sables d’Olonne will be around 22 days might be of some tiny consolation to British skipper Alex Thomson who is heading to Cape Town.

His Vendée Globe may be over because of a broken rudder sustained on Friday evening but the blistering pace of 17 days  22hrs 58 seconds that Thomson leading the 2016-17 race remains intact, and is likely to remain so for at least another four years.

The bitterly disappointed 46 year old from Gosport, Hampshire in England has explained briefly what happened to his rudder, believing that some discarded or lost fishing equipment cause the fracture,

“I was averaging 21 knots, flying the small gennaker and one reef in the mainsail. I was down below when there was a huge bang and the boat broached violently. The steering system was jammed and all I could do was roll the sails away. Once on deck I could see the rudder blade was broken and swinging around with a large piece of fishing gear jammed into the cracks. So I think I must have hit something. It certainly looks that way. Now I am having to keep the boat flat while I sail the boat now with just one rudder to Cape Town.”

Even after losing four days and nights slowed to make structural repairs, Thomson was sure he had the capacity to win, “I still felt that we could win it, I really did “I’m obviously devastated.”

From the skippers still racing and fans and supporters around the world there has been a huge outpouring of support and good wishes for the popular skipper. French rival Jérémie Beyou, who restarted nine days after the original start due to damage to his own rudder on Charal send a message of solidarity to the sailor who should have been his closest rival on this ninth edition of the race.

Many race followers had expected and hoped for a Thomson v Beyou title match but the dreams of both race heavyweights are over. Beyou crossed the Equator today and is still over 350 nautical miles behind the 31st placed Kojiro Shiraishi and 3,300 miles behind Dalin, having restarted at 2,715 miles behind the then leader HUGO BOSS.

“It is so tough for Alex. I know how hard it is to be in his place. I have been there and even this times was just inches from being in the exact same situation. I know how hard it is to prepare a Vendée Globe and to do it, three, four, five times, to be there  to try and always be reaching that holy grail, that first place. I know all the things he has had to do to prepare his boat, all he has been through to get here, and then he has nothing, no comeback, no closure. I feel so bad for him as bad as if it were happening to me. He called me when I had to turn back and he had some very nice words to say. I told him yesterday to hold his head high because there will be time to analyse it all, but all that he has done to prepare this race is something to be proud of.” Said Beyou when he spoke on the Vendée Globe Live show this lunchtime.

He added, “Hearing Damien Seguin talk earlier and seeing the conditions they have in the Southern Ocean makes me really want to be with those friends up ahead; it is not so easy to be this far behind. I am trying to make the boat go as fast as possible and have chosen a course that is direct down the Atlantic and cut off the corner."

Dalin’s lead remains steady at around 300 nautical miles ahead of Thomas Ruyant (LinkedOut) while Jean Le Cam (Yes We Cam!) and Kevin Escoffier (PRB) have been trading third place over the course of Sunday.

My first real Southern Ocean night - in the conditions behind the front. Air temperature 10°C. I gybed just before Gough Island, in the clement zone close behind the front -25knt TWS - but rapidly the breeze built and the instability arrived. It felt a little bit close to Gough Island for comfort so I furled the A7 in order to sail a clear enough course to pass safely to the South West of Gough.

My feeling was correct as rapidly I encountered the first big gust - 40 knots of wind. The sea state has built. When the breeze goes from 25 to 40 in the middle of the night for the first time, you get caught by surprise! So a little "wipe out" (thank goodness the A7 was already furled!) and Initiatives Coeur lay flat on her side with a nice cold wave breaking over her!

Ease all the sheets and back on our feet (that too is a scary manouver as you have to bear away but not too far so as to avoid a Chinese Gybe on the way out!)

So then the tricky bit is to find a trim and sail set-up for 22 to 42 knots of wind speed! That's not easy, when you are sailing solo and you need to rest a little and not stay all night in the cockpit with the sheets in your (cold) hands! It's a frustrating compromise with a lot of time "down speed" and other heart-plapitating moments of extreme acceleration down waves with a little too much wind.

Inevitably, I did a few more little wipeouts, but the night is over, nothing is broken and the average wind speed is starting to drop... later I should be able to deploy a bigger sail and get going a bit faster. The albatrosses that are gliding around in my wake are having fun! In the meantime, I am going to put a thicker pair of socks on
because my feet are blocks of ice!