Dalin Finally In The Forties 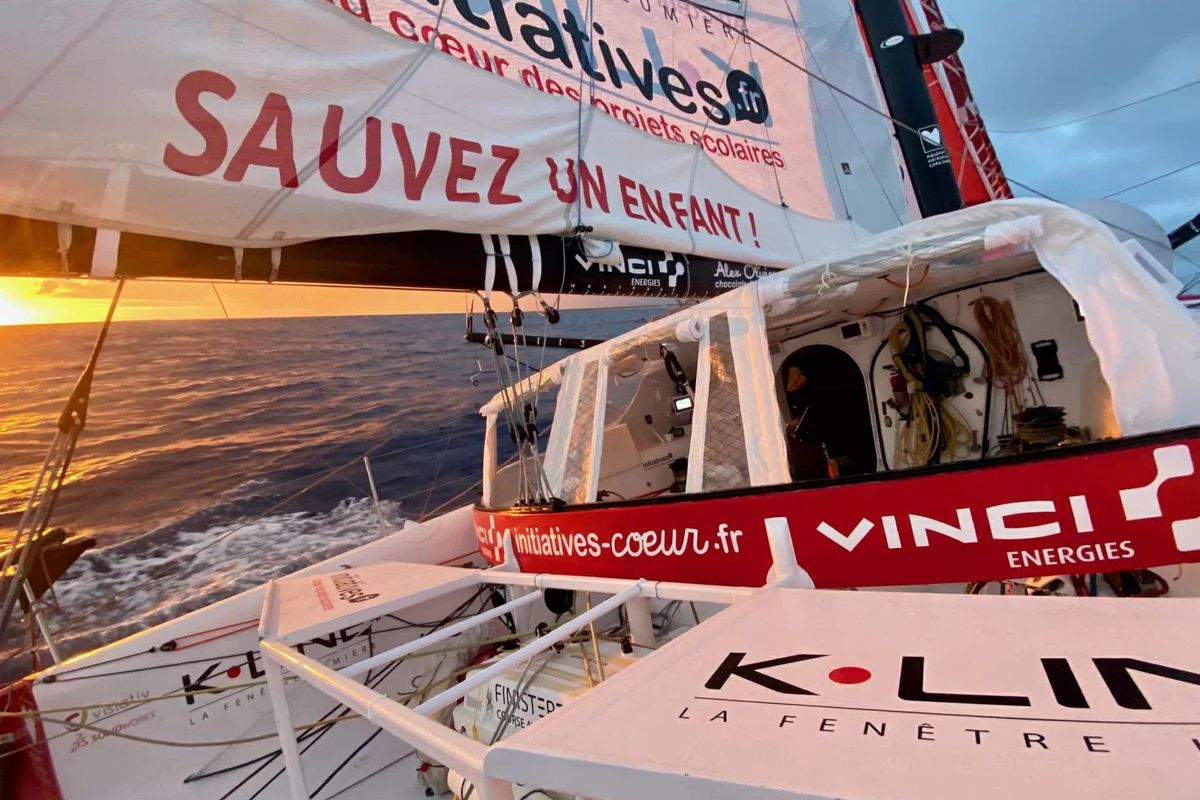 Leader 1400nms west of the longitude of Cape of Good Hope
Full Southern Ocean Regime On The Menu, Fast Rides To The Kerguelens

At the same time as Alex Thomson euphorically announced this morning that ‘the BOSS is Back’ after the British skipper completed four days and nights of structural repairs to the inside of the bow of HUGO BOSS, his French rival, second placed Thomas Ruyant and his team are deciding what to do about the damaged port foil on his LinkedOut. Despite their respective challenges to win the Vendée Globe being compromised for the moment, both skippers remain highly motivated.

The danger in leaving the damaged foil as it is, is that it may break off and cause collateral damage to the hull of his IMOCA or indeed the outrigger support rods. Laurent Bourguès, technical director of Ruyant’s TR Racing has assembled a Task Force group comprising the designers, engineers and builders who collaborated in the production of LinkedOut’s V2 second generation foil. So designer Guillaume Verdier is working with Antoine Koch the foil specialist, François Pernelle, who is head of the TR Racing design office, and marine design engineer Hervé Penfornis. This brains trust are in charge of the next steps for skipper Thomas Ruyant who is  120 miles behind the leader and still in the throes of escaping from the light winds of the South Atlantic high.

“First we need to evaluate accurately the structure of the damaged foil," explains Laurent Bourguès. "Guillaume Verdier performs all the calculations to assess the level of stress safe for a foil of which the shaft structure is compromised. And therefore, in the next few hours we need to work out the acceptable level of risk to hold to a foil which is now unusable. Thomas has withdrawn it as much as it comes in but at certain angles of heel, reaching on starboard tack, part of the foil is dragging in the water and so is subject to considerable stress, especially at high speed. In the event of it breaking we then worry about collateral damage at the level of the outrigger tie rod. If this risk seems too great to us, Thomas will have to cut the foil. He has all the tools to do so. It is up to us, to recommend where to cut it either in its widest part, flush with the hull, or nearer the tip. We are talking with other teams who have suffered this kind of damage so we can give Thomas all the answers very quickly. "

His team say Ruyant is fully prepared to get on with his race with just a single foil. They said today ‘His determination to do very well is entirely intact. He knows that statistically, his starboard foil is more important than the port side. Even without a foil, his LinkedOut is very powerful, with its ballasts system in particular capable of providing all the power needed on starboard tack to perform despite the loss of the foil. He will re-learn the boat again, play with the cant of the keel and his sail combinations in order to stay in the heart of the Vendée Globe action.”

Thomson is back in the thick of the action after taking four days repairing. He is in eighth place this afternoon and in the middle of a well-established pack of boats, circling the west side of the high pressure system and fighting to pull back miles on Sébastien Simon (ARKEA PAPREC) to his east, and Sam Davies and Louis Burton who are quicker than him in the west where there is more breeze. Briton Davies and Saint Malo based Burton – whose father is Welsh – are nicely positioned now to catch the fast-moving eastbound weather systems first.

Almost all of the lead group seem set to finally be liberated from the clutches of the South Atlantic high pressure and the light winds which have plagued progress since Monday. In a few hours times they should finally be clear and into 25-30kts downwind conditions.

"In six hours time, the sailors will see a complete change in conditions racing on the front of a low from around noon tomorrow," explains Christian Dumard, weather forecaster for the Vendée Globe. “There will be big miles to be made provided you stay in the front to be pushed at high speed all the way to the Kerguelens."

Sébastien Simon said “You have to stay focused so as not to miss out otherwise you will miss the train. It will be a very important moment."

Now with more than 120 miles in hand over compromised Ruyant, Charlie Dalin on APIVIA will be the very first to sail down to the latitude of the Roaring 40s. He will cross 40° South tonight.

Stephane Le Diraison, skipper of Time for Oceans has been pressing hard over the past four days in unstable south-easterly trade winds and his reward is 160 miles gained back on La Fabrique of the Swiss skipper Alan Roura. Both are racing 2007 Finot-Conq designs retro fitted with foils. Le Diraison’s boat started life as HUGO BOSS and has yet to finish a Vendée Globe in three successive starts as HUGO BOSS, Energa and last time with Le Diraison as Compagnie du Lit, Boulogne-Billancourt. Roura’s boat was second in the 2008-9 race as BritAir and but was first to abandon in 2016 in the hands of Bertrand de Broc.

Le Diraison, who had to retire into Australia after his mast broke on the last edition of the race, was in great form today, smiling "I'm happy to see that I managed to pick up a bit on those in front of me and I have recovered about 100 miles on the lead group. Yes it is a good bit of a charge on for me. This motivates me, I absolutely want to stay in the same weather system as those in front, so we must not give up now..I need to seize all the chances that come my way.”

Despite making important repairs to her pushpit, Isabelle Joschke (MACSF) has also managed to stay on track with an average of over 16 knots over the past 4 hours. Finally, there are only two IMOCAs left in the northern hemisphere: 2020 sisterships DMG Mori Global One and Charal which is entering the Doldrums.

I haven't slept much, what with this unstable and erratic wind. I felt it was important to sail at speed. And I had in fact slept well before the night so that I could spend it trying to go fast. I hope the conditions will stabilise so that I can get some rest. The fact that I only have the compass mode to adjust my autopilot doesn’t give me much time to rest. I have to look at my sails all the time to see if they're at the right angle because when I'm sailing downwind, the (spare, low) wind vane doesn't give me any information. I'm blind here, and never felt it more strongly than when I made a full 360° last night. I'm not very comfortable in these light airs, I'd prefer to "sail" the boat and go faster, it's more exciting!  Today is looking like it will be even more complicated, as it should get even lighter. I'll have to deal with the high-pressure system...But as soon as I’m to the south of it, I’ll reach the southern depression and be able to pick up the pace. The depression will no doubt take us pretty far, perhaps even as far as the Kerguelen Islands. I’ll have to stay alert so as not to miss it, which is really important because if I do, I’ll be hit by a high-pressure system which will really slow me down. I'm a little frustrated: I've been pretty conservative in my strategy: Sam (Davies) and Louis (Burton) have gone ahead. The group to the West will pass in front of me, but I hope to be in front in the East group. And I hope to stay in this group. It offers quite a few challenges, and they’re making good speed. I will have to keep moving the boat ahead as I have already been doing: it is a boat that can go very fast.

The south? I've looked at the conditions, it doesn’t look like there’s much going on to begin with. We'll see what happens when the front of the depression catches up with us, it will probably be stronger then. I've never sailed in these conditions. Once I’m well within them though, it will be pretty speedy all the way to the Kerguelen Islands. I’ll have to stay with this depression for as long as possible... and no doubt be very tired as a result. I took the opportunity to check the boat, and everything seems to be fine. I don’t have much hope for my wind indicators however: I think it's over for them... I could go back up the mast... but what for? I don't know, the risk is too great, for no real gains. I am annoyed by the damage, which puts me at a disadvantage, but the rest of the boat is fine. I was able to reach the St. Helena high without the windex so I know that I can go fast despite not having it... There will be of course be some difficult moments, but I'll deal with them. Everyone has their own problems: this windvane is mine. I’m starting strong on this 19th day at sea, I haven’t really seen the time go by. I miss my loved ones a lot, but there are always things to do which keep me busy. On board, I make sure I take time for myself, to read a book, watch a film, sleep. I make the most of it, as I'll have less opportunities to do so in the next few days!”