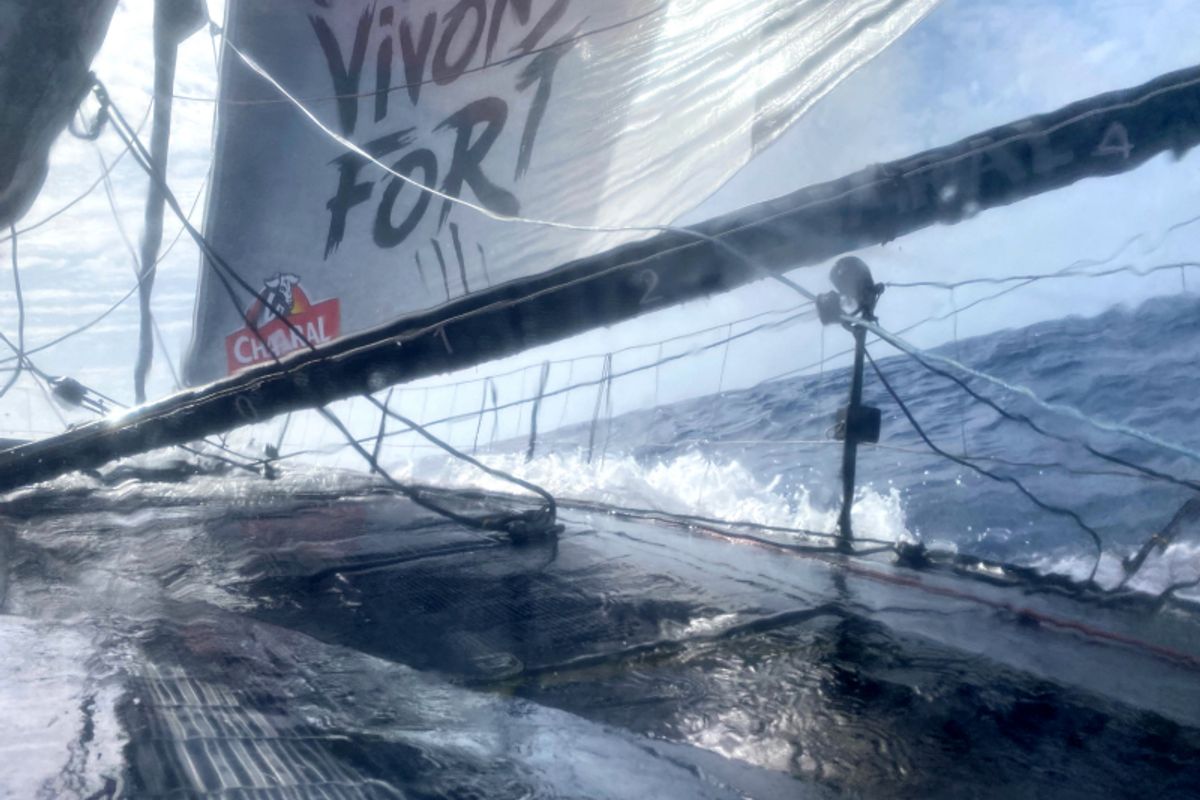 Image: Photo sent from aboard the boat Charal during the Vendee Globe sailing race on November 22, 2020

British Vendée Globe skipper Alex Thomson has today been forced to slow his HUGO BOSS to a crawl as he attempts to make a technical repair to a longitudinal beam near the bow of his IMOCA.

Thomson alerted his team to the problem around 1900 UTC Saturday evening after a routine inspection raised immediate concerns as he raced south-eastwards towards the Southern Ocean part of the leading trio of boats racing south-eastwards some 850 nautical miles east of Rio de Janeiro, Brasil.

With the imminent requirement to plunge south for more than one month in the inhospitable waters between the Cape of Good Hope and Cape Horn, the 46 year old British skipper will want to have complete faith in the repairs and in his IMOCA. But a statement issued by his Alex Thomson Racing Team this morning confirms he has the materials and the methods to effect the necessary repairs and aims to be back on course as quickly as possible.

“Alex has now put the boat into a safe position to manage the sea state in order to reduce movement onboard while he carries out the repair. He has all the necessary materials onboard, a detailed plan to follow, and a team of world class engineers advising him. We are therefore confident in his ability to complete the repair. Our objective is to carry out the necessary repair swiftly and effectively, in order to minimise the miles lost and resume racing again.” Said Alex Thomson’s Racing’s Technical Director Ross Daniel.

Having been in second place in the 33 boat fleet during Saturday, averaging 16kts at times and some 25 nautical miles behind leader Thomas Ruyant , Thomson’s pause had already cost him 150 miles on Ruyant and Charlie Dalin (Apivia) who passed into second 23 miles to windward of the British skipper around midnight last night.

“Supposing it takes Alex 24 hours to effect a repair and get going again he would rejoin the chasing group with Arkéa Paprec, Initiatives Cœur and PRB, he would lose quite a bit as that would put him 1000 miles behind at Cape of Good Hope. But I have been looking at the history of the race as well and remember that last time on the last race he rounded Cape Horn 800 miles behind Armel Le Cléac’h and so I would not call this ‘game over’". Suggested Yoann Richomme, winner of the last Route du Rhum in Class40 and double winner of La Solitaire du Figaro when he was today’s guest on the Vendée Globe LIVE English programme.

Talking about the latest generation of fast foilers Richomme, renowned as a meticulous technician, explained, “These new boats are really tough to sail, they are really hard to engineer and are slamming into the waves with a lot of power, which is most likely happened to Alex. What is hard is that we know that they took their feet off the gas a little in the south on the last race to preserve the boats last time, and I think they will be doing that again. From the scenario we are seeing they need to preserve the boats. When these boats start taking off, they were slamming the hulls a little bit further back but now these boats are fully foiling, flying a lot of the time, it is now the bows which are hitting the waves in front, from 2-3m high at times and the impact on the bows is huge and we know a lot of the boats in France had reinforcements in the bow. We saw CORUM L’Epargne in September have a two week repair in their bow. They are discovering new problems and we are hoping they have covered off most of them.”

At two weeks since the race started off Les Sables d’Olonne on Sunday 8th November there are many repairs, small and not so small, criticaland almost incidental, that skipper need to make. Contemplating the descent into the Southern Ocean race leader Thomas Ruyant (LinkedOut) had to climb the 28m mast of his IMOCA after his spare halyard broke. The two leading IMOCAs, LinkedOut and Apivia are side by side 10 miles apart setting out on a gybing match up as they drop south-eastwards towards an area of unstable air, described by Dalin as ‘mousehole’ through which they must pass to get to the Southern Ocean and a fast ride east towards the longitude of the Cape of Good Hope.

Now the Vendée Globe fleet stretches for more than 3000 miles, Jérémie Beyou in 32nd, has lengthened his stride in the south of the Canaries. Listening to the skippers on the daily calls or reading the messages sent from on board, whatever the age of the boat or its position on the Atlantic chessboard, every day brings its share of problems. Yesterday it was a weather vane for ninth placed Sébastien Simon, today a composite repair on a part of the foil well for Armel Tripon on L’Occitane and that week long repair to the mainsail of the Japanese Kojiro Shiraishi. Big or small the problems prevail through the fleet.

Armel Tripon, the skipper of L’Occitane en Provence, reflects, “The boats want to go fast, the chase their predicted speeds and they are built for that and the teams and the architects are pushing all the time to go fast. Now it's up to each of us to sail with our soul and our own peace of mind. ".

“We all lost a bit of sleep on the first week of the race. Now I am sleeping well and looking after myself. Doing a few little odd jobs and checking the boat over.  I will try and make the most of the calm conditions we are about to have to do another full boat check.

I tend to look ahead and try to not push my boat too hard. PRB is a boat from 2009 to which we have added foils, so you have to be careful and keep an eye on the structure. It is for this reason that I chose to round the tropical storm and not go too far in to shore. I will continue to sail in this way. I will still take my chances and keep looking ahead and work to keep the ones behind me, behind. I know that Thomas (Ruyant) has had halyard issues and I know from the experience on the Volvo and then on the TJV once, that going up the mast and fixing things is always very complicated to do. With regards to Alex, I really hope that he can repair, he is doing a great race and it would be a shame if it had to end so soon for him. He is in the right place to be able to repair. It is sometimes better to have the mainsail up when you go up the mast because it stabilises the boat and it also gives you an anchoring point. It is a bit less like being a cork floating on the sea, however climbs are always stressful and you need to find the best possible moment and mentally prepare for climbs.”

"I'm approaching the Doldrums and will be entering them soon. It's still windy, I'm still making progress and it won't be long before the wind backs a bit. There are not too many clouds. It should be better than we expected three days ago. There has to be some sailing without having problems!

I have just heard about Alex Thomson's structural problem. This is a mechanical sport so there are bound to be problems, these boats are still new and we haven't sailed with them for a long periods at high speeds. We will discover things as we go along. We are all taking care and not pushing our boats like we could be. There are a lot of situations where we don't know how the boat will react in the long run and it's true that with the foils, it brings new load constraints and we can’t control everything. It's a new way of sailing. The boat just needs to accelerate and the teams and architects are pushing to go fast. Now it is up to each sailor to sail with his or her peace of mind. I have a lot of small issues to deal with, problems appear before I can detect them. I go around and check regularly, after the boat has been subjected to stress. Yesterday I spent quite a bit of time making composite on a piece of the foil well that had torn off, so it had to be sanded, ground, glued, it was a day spent in the workshop! But overall the boat is very well prepared, my technical team did an exceptional job. We're going to eat up the miles, with hours of sailing and it is only natural that things will crop up. I can't wait to get to the southern hemisphere. We are figuratively changing worlds, we're going to pass to the South, and focus on how to get round the Saint Helena high. It is the first stage of the Vendée Globe!"
Armel Tripon, l'Occitane en Provence