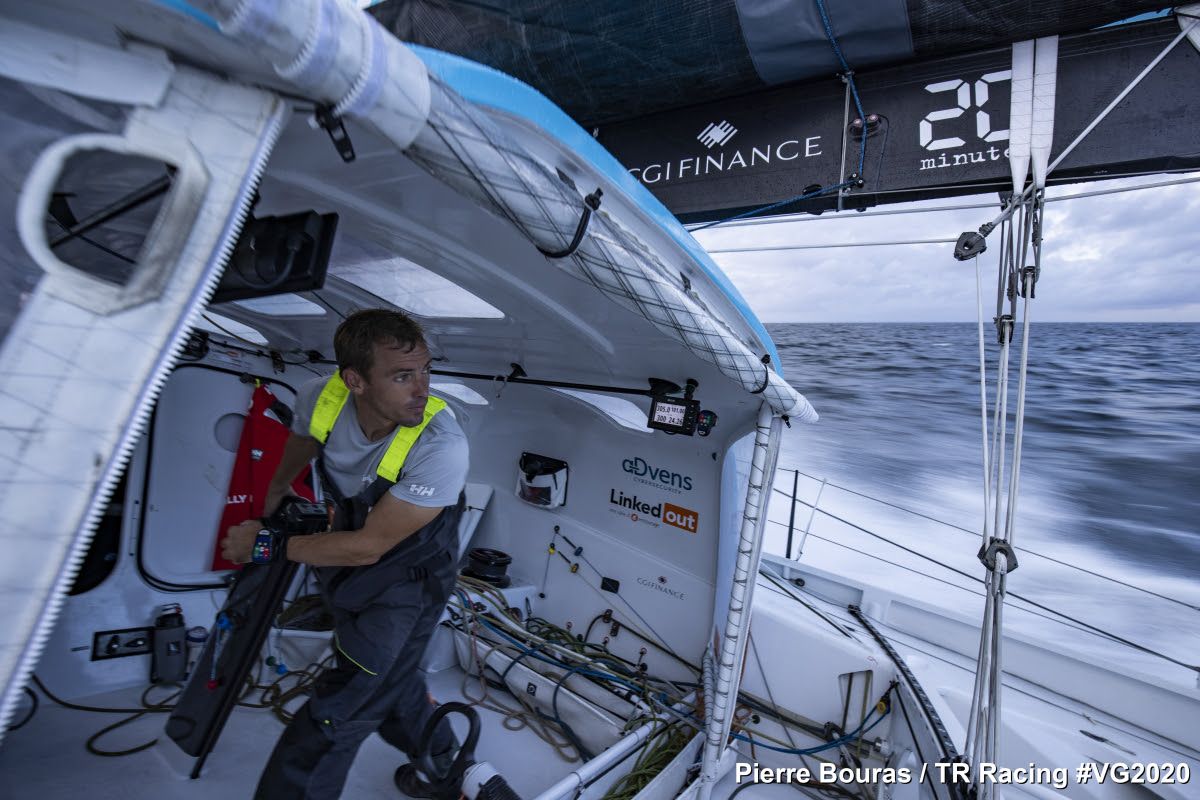 The Vendée Globe has a new race leader in Thomas Ruyant on LinkedOut. The solo racer from the north east of France, who for the second successive Vendée Globe, carries the hopes of businesses, supporters and fans from his home region, took over the race lead on this morning’s 0400hrs ranking report. After five days at the top of the race classification Britain’s Alex Thomson (HUGO BOSS) is second today at 26.5 nautical miles behind with Charlie Dalin (Apivia) some 64.5 miles behind Ruyant his compatriot.

It is the first time 39 year old Ruyant, a past winner of the Mini Transat, has lead the Vendée Globe.

“I’ve just looked to this morning’s ranking and I’m in the lead. I’m very happy. It’s nice to be the leader of the Vendée Globe in the South Atlantic but to be honest I am even more happy to be part of this trio with Alex and Charlie. It’s great to be in close contact at this stage of the race. Anyway I am very proud of this being in first place for the first time.”  Ruyant said this morning.

The Vendée Globe, as always, offers different objectives right through the fleet, something for everyone. And as the 32 solo racers contemplate the start of their third week at sea tomorrow, short term goals are common to the leading trio. They just want to position themselves best to make it onto the same high speed eastwards ride in the Southern Ocean together and not be left behind.

Ruyant, Thomson and Dalin have enjoyed a quick ride down a frontal system passing the latitude of Rio today in favourable breezes but from Sunday afternoon or evening they look set to encounter a zone of much lighter downwind conditions, requiring multiple gybes, a transition area which is a barrier between them and the Southern Ocean.

Behind them, the sheer scale of the race hit some of the younger rookies, racing down the Brazilian coast. Elsewhere the build-up of fatigue starts to affect emotions. And near the back Franco-Australian Seb Destremau (MERCI) is simply enjoying another round the world odyssey, oblivious to the race around him, as he seeks to challenge himself.

Maxime Sorel in 14th on V and B Mayenne, a first timer on the Vendée Globe on a long, long port gybe to the south, racing today off Salvador, Brasil, noted “It is a real step up to be racing on the Vendée Globe! I'm starting to be aware of how long the race will last. For me, I love contact racing, I love manoeuvring, I almost love it when it's hard. This is not my favourite part of the Vendée Globe, it's a bit monotonous. I have the impression that the friends in front are going a little faster. It's getting a bit monotonous; I'm not used to it. We're going to be on the same tack for several days, with not a lot of trimming, no sail changes. It's the first time I've ever been on the same tack for so long. The descent of the South Atlantic is going to be on the same angle, quite tight. It's not very fast for me. My boat isn't super powerful, these are clearly conditions for the foilers, but that's part of the game.”

And Briton Pip Hare, who is having a great race on Medallia in 21st admitted she has been having her ups and downs in the Doldrums, “Sometimes it is easy to get lazy and not do things to the best that you can, and I have to bully myself to make sure I don’t let things slip.” She said on the LIVE show today. Hare is having just the exact match race with Spanish fireman Didac Costa that some predicted, 77 miles of lateral separation, but less than one mile apart in terms of DTF after 13 days racing on two of the most famous boats in the race, Medallia being formerly Bernard Stamm’s Superbigou and Didac’s having started life as Ellen MacArthur’s Kingfisher.

Facing a major repair but with no significant structural issues, just behind Sorel is Isabelle Joshcke (MACSF) whose pushpit and some aft stanchions were ripped from the deck when a sheet block exploded. Joschke is unhurt but will need to improve her security at the back of the boat before she heads into the Big South for the first time.

After a marathon five days of repairs to his mainsail and battens, Japanese skipper Kojiro Shiraishi, is finally back on track with DMG MORI. Having repaired the tear, which was near the top of his mainsail, with laminate cut from below the first reef point Koji, will have to complete his Vendée Globe with a reef in all the time. And, in order to protect the repaired sail, he will only tack rather than gybe – a slightly more time-consuming process but 53-year old Shiraishi is more determined than every to complete this Vendée Globe.

“Koji is relieved that things worked out. He won’t be able now to sail like he is used to on his boa,t but he is still in the race and that is what is important to him. He paced himself through the repairs, taking his time to do them well rather than rush. He will be a bit careful and compromised but his objective is to finish.”

Shiraishi (his name means white rock in Japanese) is a vastly experienced ocean racer who completed his first non-stop circumnavigation at 27 years old. He subsequently raced to second in Class40 in the 2002 five stage Around Alone and then finished second to Switzerland’s Bernard Stamm in the Velux 5 Oceans in 2007.

Shiraishi was inspired by the exploits of the Japanese sailor who became his mentor, Yukoh Tada, who won Class 2 in the first Around Alone in 1982-83. Yukoh Tada worked as a taxi driver in Tokyo and the young Koji phoned him relentlessly until finally at 4am early one morning they connected. His apprenticeship at sea was on Japanese Tuna fishing boats before he went on to work as preparateur for Yukoh Tada for six years.

“He was a simple man like anyone else and did a simple job to be able to do what he loved. And that was sailing. So, the first time I went sailing was with him, it was great to not only get to meet and to know the man who I idolized for so long!" Koji recalled of his friend and mentor who sadly took his own life in 1991 and whose legacy he continues with his IMOCA Spirit of Yukoh.

“The weather is nice, hot, even boiling! I have had to put the engine on to charge things and you just can’t be inside the boat. I am right in the middle of fixing the wind vane and the electronics and the boat is moving about a lot. Not easy trying to connect 1 mm cables!

I am looking ahead to rounding the St. Helena high and the convergence zone near Brazil. There is a decision to be made, to either go through the front or, try and go round it by going further West. I also need to change my sail to carry on going South as the wind has dropped a bit and it has veered to the left. I have quite a lot to do, with the sail change, my job list to get through and then to find the way to get through this front, which is quite tricky. Conditions will also lighten more and more, and I need my weather instruments to know which direction the wind is coming from. It is a bit like driving a car without being able to see out the window or know what speed you are doing.

When you do all this physical work in the heat, there is nothing better than a little shower at the end of the day. I have a small portable shower that I fill with 2 to 3 litres of water and soap up and rinse off and it is like I come alive again. It is great.”

"I have been having a series of good naps. It is not like long nights of sleep, but it's good, I'm getting a lot of rest and making the most of it as it is harder to rest during the day. I'm starting to get used to the boat's speed, I sleep with more restfully than at the beginning. You get used to everything.

I have several options for sleeping. Here I am on a big mattress which is 20 cm off the floor, quite thick, quite wide, made to measure for me. I also have my big reclining centre bucket seat, which is good for short naps. Then I have a beanbag, in some conditions, it's not bad, I can use it anywhere on the boat.

There's a lot of pressure between the three of us, the boats are close together in terms of speed and we're in exactly the same weather system. I'm very happy to be where I am in this leading trio on the attack of the South Atlantic. Whilst it is a standard front, it is not easy to negotiate. The corridor through is not quite wide enough. As of close of play tomorrow there are going to be a lot of manoeuvring; we are going to get into the tougher stuff.

My shift to the East came about naturally. I was looking for a fast angle, to have a good pressure all the time. Alex (Thomson) was slower than us for a long time, maybe he had less wind on the initial part of entry into the South Atlantic. All three of us have similar speeds now and going fast.”