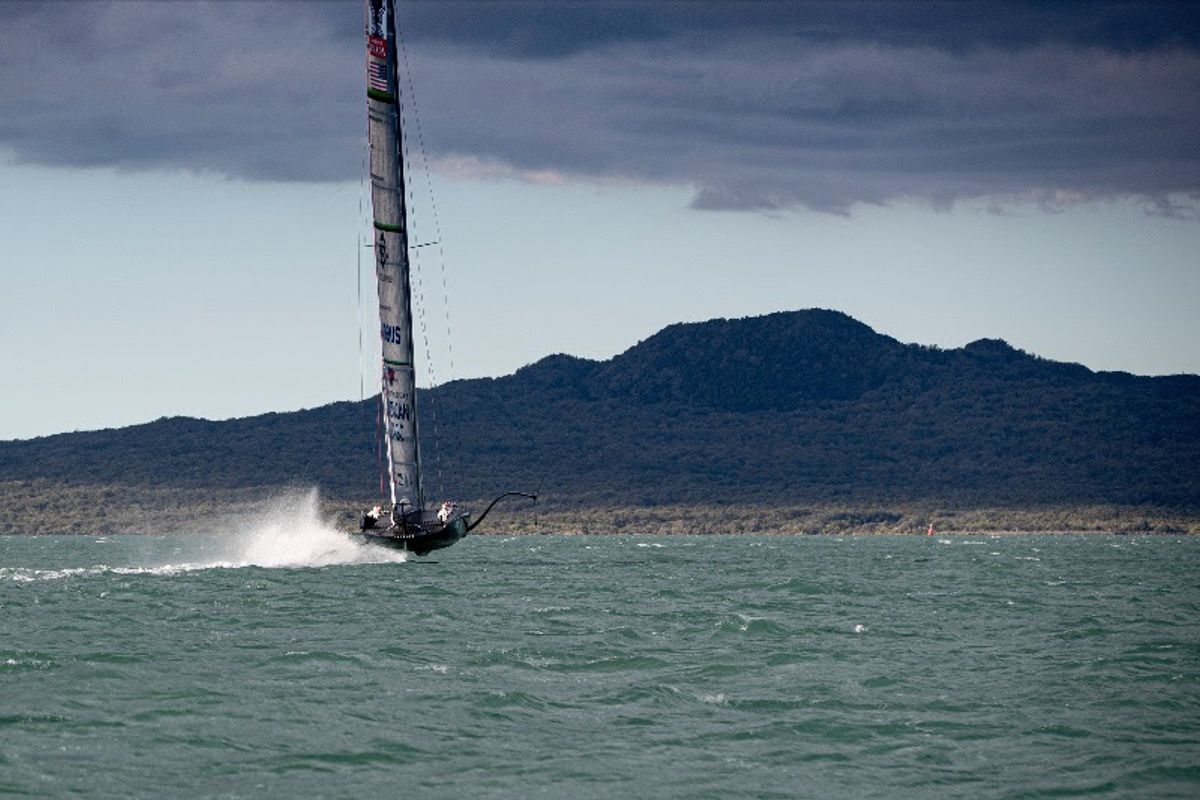 After a 9:00 AM christening event on Friday, October 16th at the team's base in the Wynyard Quarter, the team engaged in an afternoon of dockside testing. At 4:30 PM in flat-calm conditions, the dark blue AC75 was pulled up onto its foils by a chase boat and towed at high speed to a location near Rangitoto Lighthouse. Design, shore and sailing team members then conducted additional testing on sails and systems prior to making the decision to let PATRIOT cast off under her own power.

"We went off the dock thinking that if the breeze filled in, we'd have a good sail," said Terry Hutchinson, Skipper and Executive Director of American Magic. "Straight away, we came into 21 knots [of pressure], and we were into it. This really demonstrates the confidence that the sailors have in everyone on the team."

After 92 days of on-the-water development in the AM38 test boat and 66 days on the team's first AC75, DEFIANT, American Magic began logging hours on a yacht that is the embodiment of three years of hard-earned data and lessons.

"Yesterday was PATRIOT's first sailing day, but the overall operation felt like any other day," said Hutchinson. "Despite having a brand-new boat that we were all excited about, the whole session felt normal. That's a great validation of our shore team and all of the work put in since we launched the Mule in 2018."

After sailing from Rangitoto Lighthouse to North Head, PATRIOT headed upwind past Devonport before bearing away back towards Rangitoto Island. The AC75's first gybe, attempted with a windspeed of around 20 knots, turned out to be a memorable one. "We had a great nosedive, and that was exciting," said Hutchinson. "It was nothing that we haven't seen or done on our other boats, and our familiarity with PATRIOT will increase rapidly over the coming days."

Helmsman Dean Barker noted that he and team were encouraged by the yacht's performance overall. Barker described the new AC75, built by a team of 50 in Bristol, Rhode Island, as "lively."

American Magic's approach to performance development involves a firm focus on spending time on the water in conjunction with advanced simulation onshore. To that end, the U.S. Challenger expects to log as many sailing days as possible until the first preliminary racing event, America's Cup World Series Auckland (December 17-20, 2020).

Image: PATRIOT hurtles downwind towards Rangitoto Island after a flyby of Auckland's harbor front. Testing Manager Anderson Reggio described the session as a "good first push" for the AC75. © American Magic / Will Ricketson