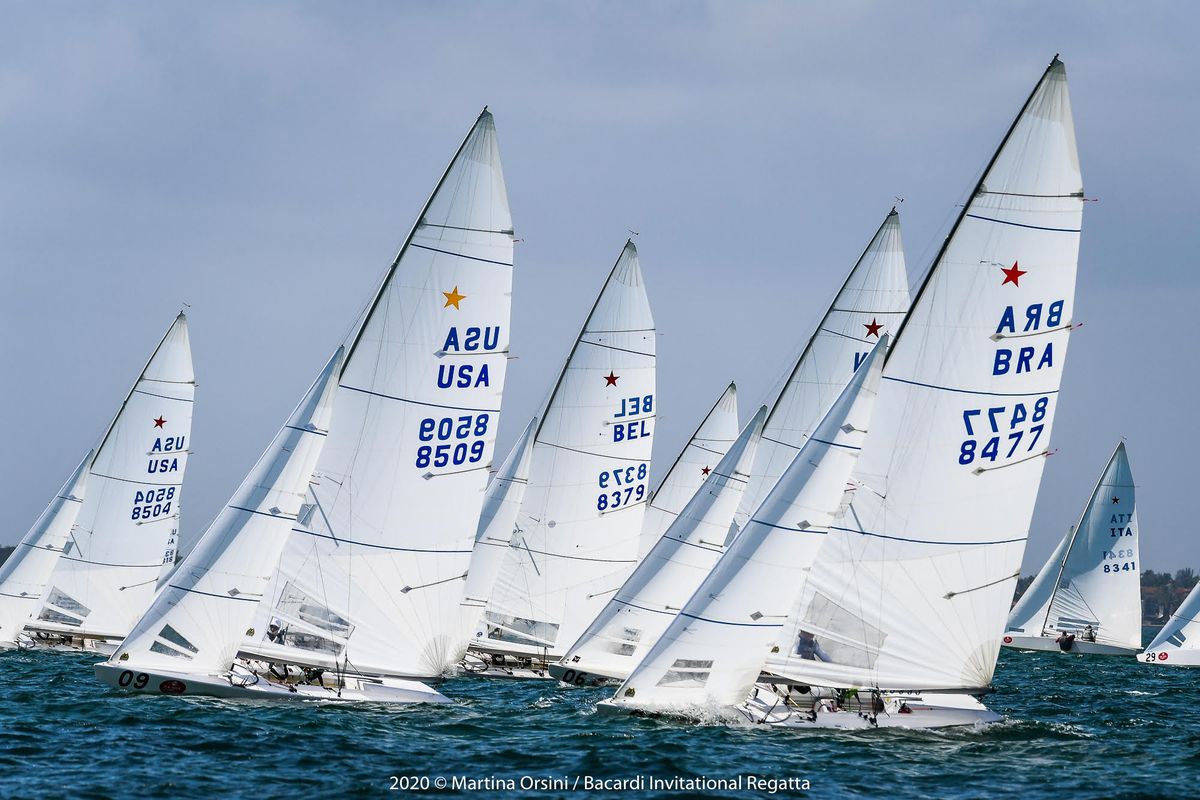 On the second day of the 93rd Bacardi Cup, the sixty-five teams in the Star Class were greeted by warmer temperatures and a cloudy sky at Coral Reef Yacht Club, the now home of the event which was first held in Havana, Cuba, in 1927.

With a tricky 8-10 knots of breeze from the southeast, the 165 sailors left the dock ready for the starting sequence at 1155 hours to battle it out in one endurance race per day, as per the traditional format of the Star Class. The Race Committee hoisted the ‘U’ flag but that didn’t cool down the spirits of the fiery teams kicking off the line, as the first start ended up in a general recall. Principal Race Officer Carl Schellbach opted for the penalty threat of the black flag for the second attempt and got race two off to a clean start.

The starting line-up boasts one hundred and thirty sailors from over fifteen nations and a fleet packed with former and reigning World Champions, who are easily spotted by the gold star on their mainsail, and Olympic medalists. With such massive depth in elite performance, numerous teams can mount a credible bid for victory and most of the big names opted for the Committee end of the line. Only local super hero Augie Diaz (USA) sniffed out a preference for the left side of the track, but by the windward mark all the best players were in the leading pack anyway. The light air guru George Szabo (USA) with crew Guy Avellon (USA) rounded the mark first, hunted down by the Danish/German team of Jorgen Shoenherr and Markus Koy, then the reigning Star World Champions Mateusz Kusznierewicz and Bruno Prada, and in 4th Diaz and Henry Boening (BRA). By the downwind gate the order of play was the same, with the addition of Star Class newcomer Manu Hens (BEL), who is usually found racing a Snipe, showing his talent at the helm and gearing up to sixth. Ever present in attack, Kusznierewicz and Prada took control of the fleet ahead of mark three and extended to the finish line to conquer race two. Adding a win to their second place from yesterday places them at the top of the leaderboard.

“It feels great,” said five-time Star World Champion and Olympic medalist Bruno Prada. “In today’s conditions our boat is super fast and that makes our job much easier, but also today we executed what we had planned and this always feels very rewarding.”

Five-time Olympian Kusznierewicz, who also counts Olympic and World Championship medals in the Finn Class to his tally of successes, added, “I can only say that we have great communication onboard. From the minute the flags are hoisted we know exactly what to do both upwind and downwind, and the tactics comes easy as we move on the racecourse. It’s a really good feeling and winning the race only shows it’s all working well.”

The 2017 Star Class World Champions Eiind Melleby (NOR) and Joshua Revkin (USA) added a 3rd to their scorecard and leap to second overall, with overnight leaders Peter and Robert O’Leary (IRL) dropping to third after their 7th place. The ‘king of the bay’ Augie Diaz, racing with Henry ‘Maguila’ Boening, finished in 2nd to advance to fourth overall. Keeping in fighting distance of the leaders are the 2019 Bacardi Cup winners, Eric Doyle and Payson Infelise (USA), who count two top 10 finishes to sit in 9th overall.

From Thursday 5 March, the Star Class will be joined by the J70, Melges 24, Viper 640, VXOne sports boat and the foiling AV8 and Windfoil classes. The welcome party for these classes will take place on Wednesday afternoon at Shake a Leg Miami, where the Bacardi Invitational Regatta village will officially open.