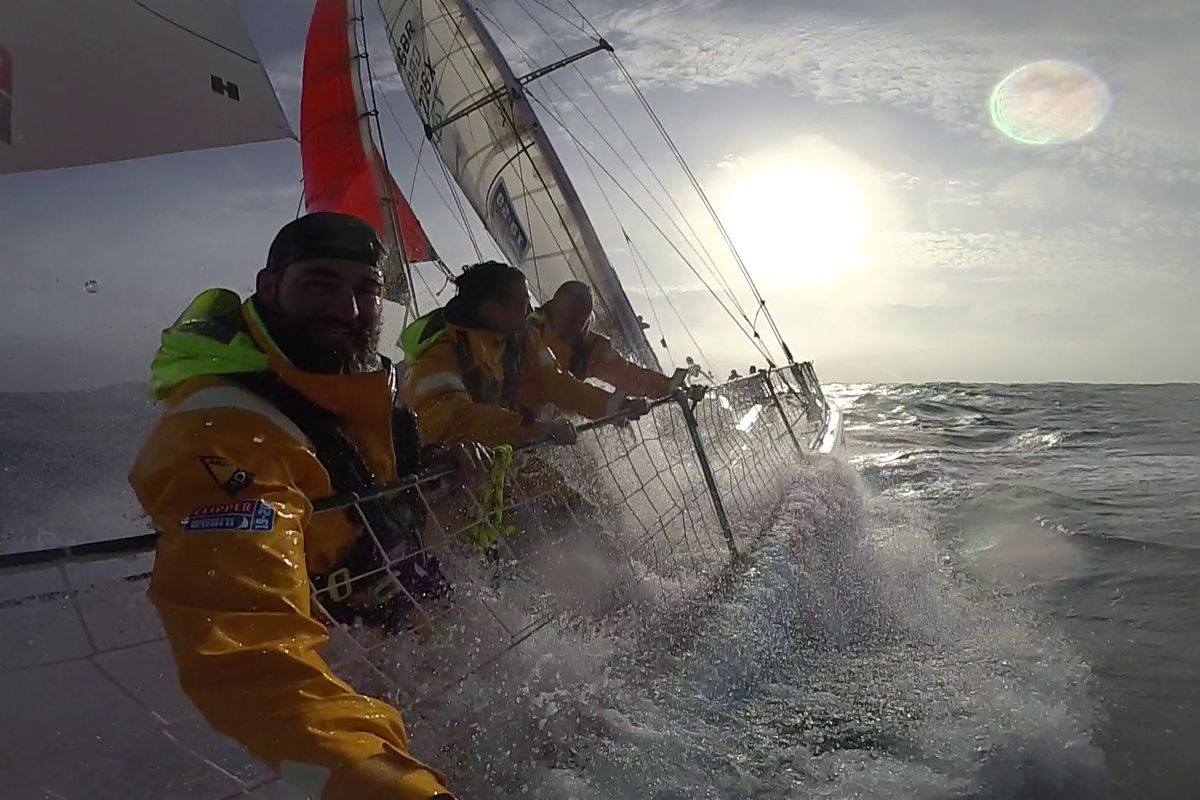 Image: The Ha Long Bay, Viet Nam crew take a moment to enjoy the waves crashing over the bow during the Dell Rugged Ocean Sprint.

Ha Long Bay, Viet Nam has relinquished its windward position, and the lead, to Qingdao after completing the Dell Latitude Rugged Ocean Sprint. The chasing pack prepares to enter the sprint and the westerly yachts struggle in lighter winds; it has been a varied 24 hours on the fifteenth day of Race 4: the Marlow Southern Ocean Sleigh Ride.

The Ha Long Bay, Viet Nam crew take a moment to enjoy the waves crashing over the bow during the Dell Rugged Ocean Sprint. Due to the spread of the fleet each team will pass in different weather conditions and it won’t be until the last yacht has completed the course that the results will be announced.

Whilst wet on deck, and below, the conditions have eased in between the low pressure systems. Seattle and others have been shaking out reefs in the Mainsail and increasing their sail area.

For those further to the north including Seattle and WTC Logistics there has been time to dry out some kit and even air some skin with shorts spotted on deck!

Zhuhai Skipper, Nick Leggatt reported: “Around 1000 (local time) we left the Roaring Forties. The weather does seem brighter and more mild, but I think it is a bit of a "calm before the storm."  Not that we are expecting anything too dramatic, mind, but there is another frontal system approaching us from the west in the weather forecast.”

Maintenance on Dare To Lead
Across the fleet the break in weather has provided opportunities to make any repairs needed and Dare To Lead today celebrating after repairs to its Mainsail were completed (see above) and it is back hoisted again. Skipper Guy Waites said: “With our newly repaired Mainsail full on the hoist we are a contented ship, crew members are happy in their work, broad smiles of satisfaction yesterday following the successful raising of the boom from the traveller and hoisting the mainsail, celebrated with fresh coffee and flapjack.”

Electrical storm on Unicef
At the other end of the fleet following a night of thunderstorms on day 14 Unicef experienced a much quieter day and although haven't ground to a halt the team is struggling in the lighter winds. However with the start of advent a festive feeling has spread on board.

Festive fun on Unicef
Unicef Skipper Ian Wiggin reported: “The start of advent yesterday added a whole new dimension to our lunchtime Sunday funday yesterday. Sophie, our Chief Fun Officer, had raided her secret supplies and dragged out a bonanza of chocolates,Christmas themed goodies and even an advent calendar to mark the occasion.”

The the easterly teams wait for the wind to veer and back and the westerly teams look forward to the wind building to carry them forward.