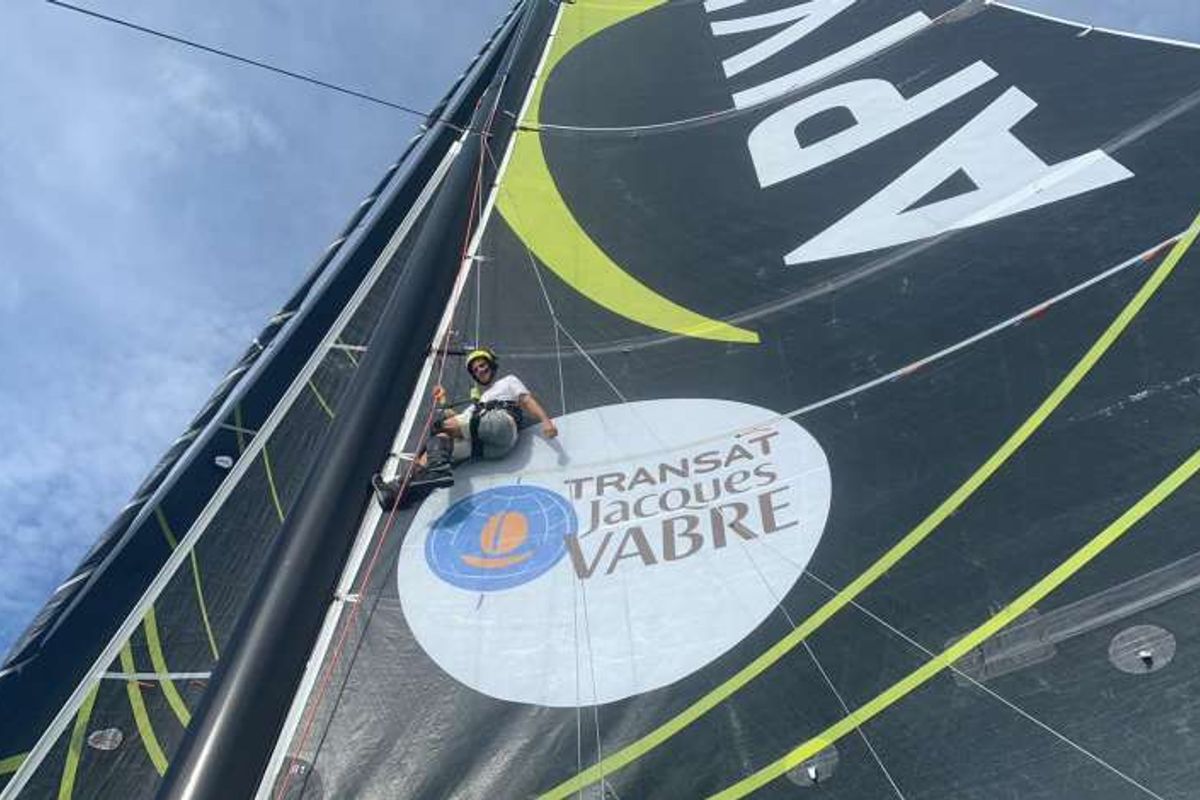 After Groupe GCA – Mille et un sourires became the first boat to cross the line in the Bay of All Saints in the small hours of Friday morning under a magical moon, the second – Solidaires En Peloton – ARSEP -arrived in full flight in glorious sunshine.  They crossed the line on Friday, November 8, 2019 at 14:53:01 (UTC ), 12 days 2 hours 38 minutes and 01 seconds after leaving Le Havre, France on Sunday, October 27 at 12:15 (UTC)

Apivia looks uncatchable now, broad reaching away south to the tip of north-east Brazil in 16-knot south-easterly trade winds. The first and only one of the leading group to make it cleanly out of the Doldrums on Thursday, Apivia have covered nearly 100 miles more (396 miles) in the last 24 hours than any of their pursuers.

At the 15:00 UTC ranking they were 237 miles ahead of PRB in second with only 571 miles to the finish. PRB have no such luxury. Everyone is chasing them. In a 2010 boat without foils, it should be tough for Banque Populaireto hold on in third, five miles behind. America’s Charlie Enright  on 11thHour Racingis just 24 miles behind. In normal circumstances they would all be worried by having Charal just another 25 miles behind. But it is hard to assess the physical and psychological effect that the Doldrums have had on Charal. The Doldrums have cost them 410 miles since they entered 120 miles ahead on November 5.

“At last! We’re free from the Doldrums and VERY happy to be in the SE Trade Winds,” Britain’s Samantha Davies, lying eighth with her French co-skipper Paul Meilhat, said in her message today.

“It is about 40deg Celsius and 100% humidity. Like sleeping in a sauna. Oh, a sauna that is attached to a roller coaster!!

“The good thing is that we are going REALLY FAST and our old boat is definitely very happy with her new foils ????. We’re in the lead pack, albeit at the back of this pack, but we’re happy where we are, maybe we can gain a place on the run into Salvador…”

The music has stopped. The wind section has packed up and the leading skippers are hoping they haven’t gone for a long weekend.

At the 15:00 UTC ranking the front of the fleet had all slowed down, Crédit Mutuel’s losses had finished and they had slightly extended to lead Britain’s Sam Goodchild on Leyton, by 65 miles, despite their corkscrew trajectory. The 2017 runner-up, Aïna Enfance & Avenir remained a further 24 miles behind in third, with all three on a similar track. Banque du Lémanin fourth is a further 80 miles back. The whole front of the fleet is now down into single figure speeds and Crédit Mutuel reported completely stalling overnight.

“A sinister place”, “Mordor” and just “merde” have punctuated some of the skipper’s logs and interviews. From the poetic to the prosaic, the choice of language changes with every breath of sailor and wind.

“We’re into the thick of things now,” Adrien Hardy, Crédit Mutuel’sco-skipper said overnight.“We’ve been stalled for two or three hours. We hope it won’t last too long. It’s not easy, we’ve seen the forecasts, we have to stay close to the most direct route, and tack as directly south as we can. It's a radical change of atmosphere, yesterday, we were riding along at 15/20 knots and now I'm standing in the boat, and it’s not moving at all.

We’re not looking too far behind us, we just have to get south as fast as possible; there’s nothing we can do, we just have to stay calm, it’ll be like that for one or two days. When you see that the IMOCA have still not got going again, it's not encouraging.”