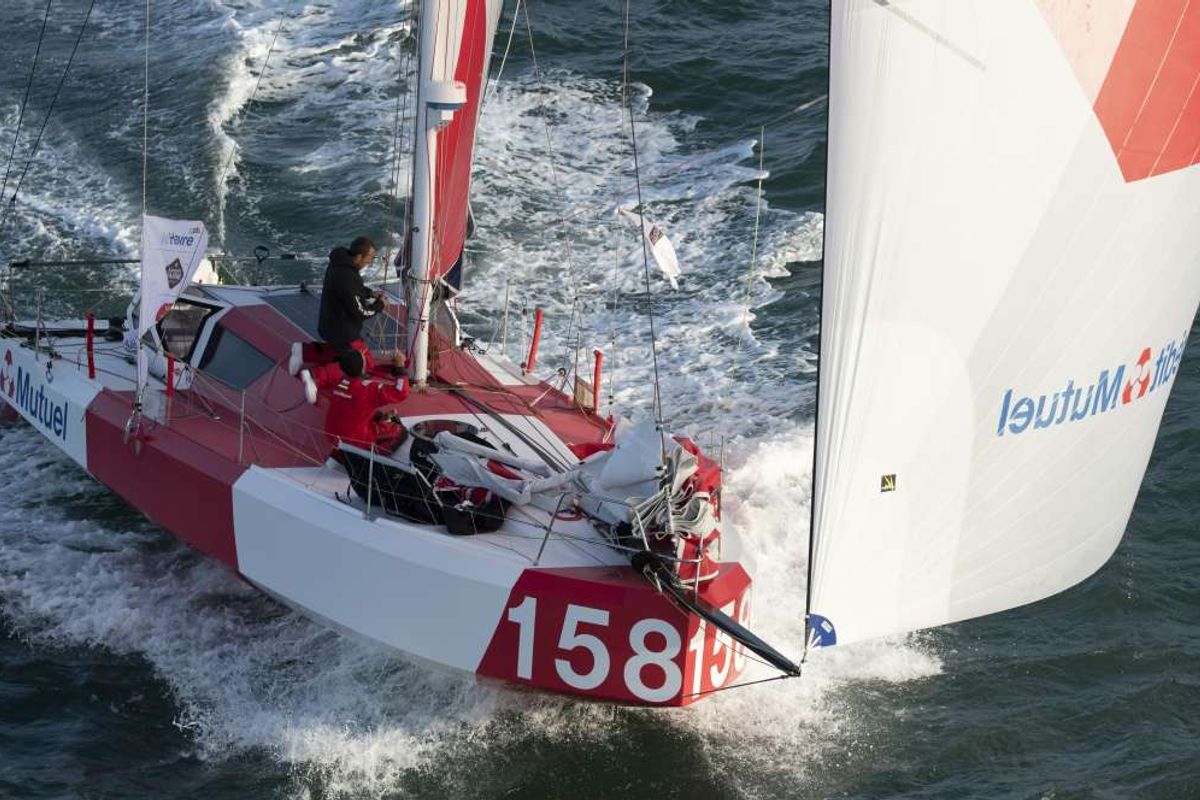 The route to victory for Charal and the IMOCA podium in the 14th edition of the Transat Jacques Vabre Normandie Le Havre may have just become lot simpler according to the official race meteorologist. Richard Silvani, from Météo France said that contrary the forecast a few days ago, the Doldrums are not looking so active now. Charal should enter the zone most feared by sailors tonight. The two Mulit50s leading the fleet are already in there.

“The Doldrums are not very active because on each side of it the trade winds are well established,” was the analysis from Silvani, the official race meteorologist. “In fact, the two anticyclones that are positioned on either side of the equator, at the Azores in the northern hemisphere and St. Helena in the southern hemisphere, favour an established synoptic wind.”

Doubtless that will make more sense to some than others and not all skippers will quite the same when they emerge from the notorious Doldrums. Many are and varied are the sages who have predicted a simple passage of the Doldrums, so unsurprisingly Silvani gave himself some insurance: The Doldrums are still tricky!” Silvani added.

Doubtless that will make more sense to some than others and not all skippers will quite the same when they emerge from the notorious Doldrums. There seems to be a little wind in there, between 6 and 8 knots, but the squalls are active and the clouds are there. “The Doldrums are still tricky!” Silvani added.

For the IMOCA, that are beginning to see the sky thicken, the trade winds are getting weaker. Charal has begun its deceleration, but Apivia and Primonial, the third Multi50, were still clocking up nearly 19 knots this afternoon. Charal had lengthened its lead as the field stretched overnight with Apivia escaping from America’s 11th Hour Racing.

The gaps will start coming down now but the picture will not be clear until all the boats are out of the Doldrums. At the 15:00 UTC ranking, Charal, despite slowing down first still had comfortably the best 24-hour run of the lead group (407 miles). It led by 84 miles from Apivia and 150 miles from 11th Hour Racing.

The incredible resurrection of Thomas Ruyant and Antoine Koch on Advens for Cybersecurity has brought them back into a group of five IMOCA positioned to the west of the southern islands of the Cape Verde archipelago.

More than 1,000 miles behind Charal, Ariel II, skippered by the Finnish/Irish crew of Huusela / Fergusson, is doing the best it can with a very damaged mainsail since the Bay of Biscay.

After cutting their damaged keel from the boat yesterday, Hugo Boss are making for the Cape Verde islands, about 850 almost due south of where they are now.

At the front, Crédit Mutuel (Lipinski / Hardy) are continuing to extend their lead in a Charal like way. Britain’s Sam Goodchild on Leyton and Aïna Enfance & Avenir. are holding on, but in the more consistent trade winds they are enjoying than at the front of the IMOCA.

At the 15:00 UTC ranking, Crédit Mutuel, had made 381 miles in the last 24 hours, 21 more than Leyton and 31 more than Aïna Enfance & Avenir. They trail Crédit Mutuel by 51 and 69 miles respectively, but here is a more defined lead group of three boats now, with Banque Du Léman in fourth, 161 miles off the lead.

This long port tack south is not about great strategy, but rather positioning and especially maximum speed.

Aymeric Chappellier on Aïna Enfance & Avenir reported from the northern Cape Verde islands that they were getting sustained breeze of up to 30 knots at midday UTC: “It's a little humid, and we’re getting a little wet. We have 30 knots and big sea.