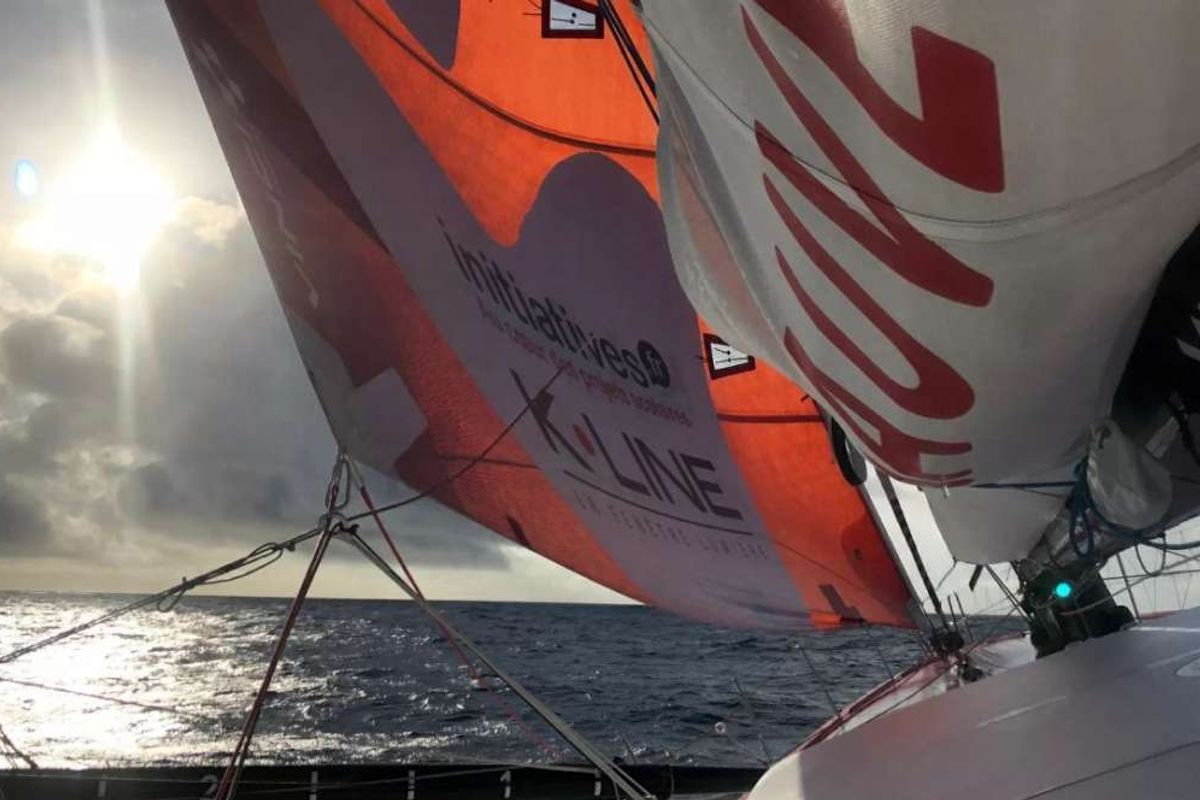 As he continued to push hard at the front of the fleet, Britain’s Sam Goodchild on Leyton admitted a shiver went down his spine – and probably his mast too – when he realised what had happened to fellow Briton, Luke Berry, on the first night of the Transat Jacques Vabre Normandie Le Havre.

“It definitely hit a nerve because it happened to me last year (in the Route du Rhum) basically in the same point in the race in the first couple of days and the mast dropped down,” said Goodchild, speaking for the first time since Berry was dismasted on Monday morning, just 18 hours after the start of the race. “Lamotte were a mile ahead of us, it was night time, but we saw them on the AIS (Automatic Identification System), and all of a sudden they weren’t there anymore and we saw a few flashing lights on their deck go past us.

“We discussed it between us (with co-skipper Fabien Delahaye), what do you think’s happened, neither of us wanted to say it, but we both kind of thought they’d lost the race. So, we called our shore team and said if you can find out how they broke it, it would be nice to know because we’ve got exactly the same boat and exactly the same rig, so it definitely hit a nerve when I did it last year and you’re in a transatlantic race and on the first night it’s game over. It hurts quite a lot, so I feel for the guys and hopefully they’ll be back stronger next time.”

At the 15:00 UTC ranking as they entered the fourth day of racing, Leytonwere keeping pace and were just five miles behind Aïna Enfance and Avenir  (Aymeric Chappellier / Pierre Leboucher), at the front of the 23-boat Class40 fleet (Beijaflore became the fourth boat to abandon this morning).

The race in Class40 looks like a battle of attrition as they exit the Bay of Biscay and approach Cape Finisterre. The conditions only eased of temporarily today – giving Goodchild a moment to talk – and dry some clothes.

Compared to the IMOCA the fleet is much more homogenous, with only Crédit Mutuel, opting to go a little further west, which for the moment does not look very successful. It has been hard going for all as they head upwind at under 8 knots as cautiously as one descends steps covered in ice.

“Today, it’s easier physically, but mentally harder because the wind is really not very stable, it’s shifting through 30-40 degrees and going from 10 knots to 18 knots, which is not very relaxing,” Goodchild said. “Looking forward to being able to dry that off again today, because tonight and tomorrow again look a bit more bumpy going upwind again. We’re just to keep things in one piece and stay in the game until we get into slightly nicer conditions.”

IMOCA: An upside down leaderboard?

The extraordinary split in the IMOCA fleet continued yesterday with a band of five mavericks fully investing heavily in the west and heading into the large low-pressure system which they hope will slingshot them into the trade winds faster than the southerners. If they are right we will almost have to turn the leaderboard upside down as it currently shows Hugo Boss in 22ndplace in the 29-boat fleet, 171 miles behind the new leader, PRB.

Thomson said Wednesday that heading west was not a strategy but had been forced upon he and co-skipper, Neal McDonald by sail damage – but that it might still pay off.

“It’s been pretty tiring out here for the first days, lots of little niggles and stuff. Not quite right. But still, very happy with how we’re doing. We had a storming VMG, or reach, out of the Channel. It was pretty amazing. Startlingly fast, very happy with that,” Thomson said in his first communication after this pulsating first 72 hours.  “And then at Ushant we had some sail damage. One of our reaching sails, the tack loops of it ripped off the sail for some reason so that was a bit of a pain. And hence we lost a load of miles and basically it stopped us from following the south route hence our push the west, which may still work out.

“It’s certainly not a forgone conclusion that it’s going to be wrong. The boats to the south are going to have to cross a ridge, quite a light ridge of high pressure, so very light winds. For us, we’ll be crossing the similar reach around about Saturday and it should be easier for us and it should be a very good angle, wind angle - a fast run down to the equator. Neal and I are both very tired. Not much sleep but we’re not in bad shape. We’re about to get stuck into this sail repair. We’re still in the race so pretty happy.”

With Thomson in the west are Boris Herrmann (Germany) and Will Harris (Britain) on Malizia II Yacht Club de Monaco; and three French boats, Bureau Vallée II, Maître CoQ IV, and Prysmian Group. The weather files show 35 to 40 knots and a very confused sea state for ten hours awaiting them.

They are all banking on that ridge stopping the southerners, who are back in much more benign reaching conditions as they approach Lisbon. Leading since Ushant, Charal,has been overtaken by PRB, knitted a masterstroke on the tip of Galicia, tacking just a mile away from the coast as they threaded the TSS (Traffic Separation Scheme) at Cape Finisterre. Britain’s Samantha Davies (Initiatives-Cœur) third overnight, has slipped back to fifth, but only 11 miles separate the front five. America’s Charlie Enright (11thHour Racing) is only seven miles behind in sixth.

To catch the trade winds, the southerners will have to cross an area of ​​high pressure around the archipelago of Madeira.

Meanwhile, German skipper Isabelle Joschke and French co-skipper Morgan Lagravière on MACSFare heading to Lorient today to try and fix their keel and re-start the race. They had diverted to Brest early on Monday evening.

PRB is in the process of taking a 1h30min penalty turn on the water for accidentally breaking the engine seal. The race jury imposed this standard penalty without additional stipulations , PRB accepted. The only requirement was that PRB had to complete the penalty before passing the equator. The two skippers, Kévin Escoffier and Nicolas Lunven, chose to do it now.

Here is the relevant article 12.2.2 of the sailing instructions:

12.2.2 Taking a time penalty when racing

When the boat is about to take his/her penalty, he/she must contact Race Management who will then time the penalty from a segment indicated to the boat by Race Management.

Following the penalty, if this has been completed and confirmed by the Race Committee, the boat shall cross that segment again before continuing the race.

At 09:18 UTC, it will re-cross the area from north to south, and resume its normal route.