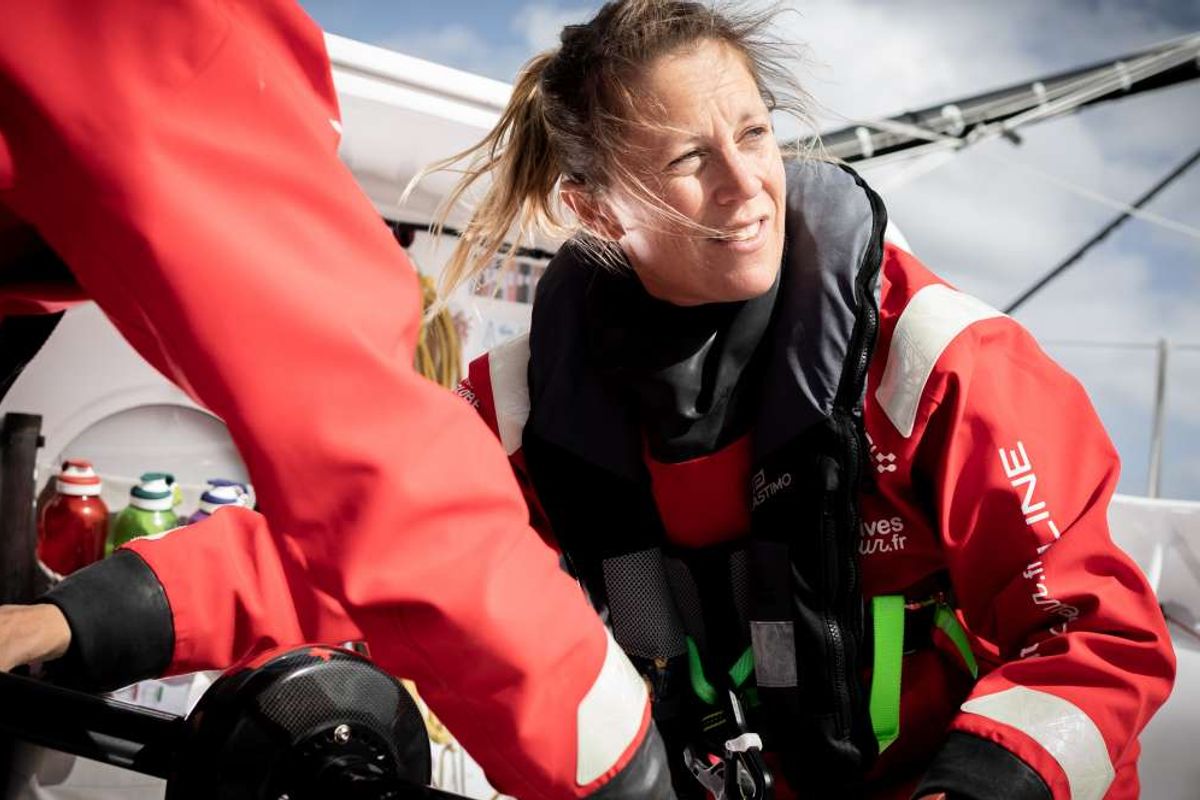 Britain’s Samantha Davies and her French co-skipper, Paul Meilhat have sent a message at the start of this and it rang out across the Bay of Biscay yesterday as they tacked south-west at Cape Finisterre in third place. They are fast and they are here to win the Transat Jacques Vabre Normandie Le Havre.

In the same wind as the latest generation IMOCA 60ft monohulls, Initiatives-Cœur, their VPLP – Verdier design launched in 2010, but heavily upgraded and with huge foils, has kept pace and was in third place at the 15:00 UTC ranking.

“You can see it (on the tracker), we’re really happy with the speeds we were doing yesterday and it’s not scary at all either,” Davies said. “I’m really happy and the boat feels great.”

Behind them some, like PRB,tacked so close to the Spanish coast it looked they were going to order tapas.

With weather files that would give Aeolus a headache, the 29 IMOCA skippers have been wrestling, as forecast, with whether to go east or west. Is staying east going for quick profits or is it pragmatism? Is heading west investing in your future or risking conditions not favourable for these boats?

The bulk of the fleet tacked on Monday night, led by Davies, who were the first to turn onto the more direct road to Salvador de Bahia. They were quickly followed by the bulk of the fleet. Was that a dilemma for the leader, Charal? Follow their route to south or join Hugo Boss?

Charaltacked. On a tactical level, the skippers, Jérémie Beyou and Christopher Pratt's decision to accompany the rest of the fleet late in the night was pragmatic, because the scenario for the next 48 hours is quite uncertain. “It's a more tactical than strategic decision,” Pratt admitted on Tuesday morning.

The decision is not final and Davies and others may still look west.

“We always kept both options open, and we’re still looking at all the options because it’s really, really tricky,” she said. “What we don’t want to do is be too influenced by what the rest of the fleet is doing. We just want to sail what we think is the best route, knowing that it’s a very difficult choice to make.”

Class40: Another match race to Brazil?

The situation is not so different in the Class40, as they were struggling upwind in the middle of the Bay of Biscay yesterday afternoon, with the professionals beginning to leave the amateurs behind in the 25-boat fleet. The going has been too tough for the Japanese duo, Hiroshi Kitada and Takeshi Hara, on the Class40 KIHO, who informed the race office that they had abandoned this afternoon (Tuesday).

At the 15:00 UTC ranking, the marginal pre-race favourites, Aïna Enfance and Avenir  (Aymeric Chappellier / Pierre Leboucher), had taken the lead from Britain’s Sam Goodchild and his French co-skipper, Fabien Delahaye. But only four miles separated them and both had to tack twice quickly to try and improve their angle in the complicated conditions. Both are in almost identical Manuard mach 3 designs and in 2017, Chappellier was beaten into second by just 17 minutes. The rest of the fleet are trying to hang on after the dismasting of the leader, Britain’s Luke Berry (Lamotte – Module Création) on Monday.

“We tacked twice because we were making the road too long; we were sailing at 285° and it was really bad,” Chappellier said. “Now, we’re waiting for a shift left to be able to restart the attack. We’re mostly going our own way, while keep a close eye on Leyton's position. Our idea is to continue on port for the next 24 hours. We expect wind from the south, then a rotation to the west so we can dive. That will be good, because for the moment, we’re more west than south and it’s not really the way to Brazil.”

Both will be keeping an eye on Credit Mutuel(Ian Lipinski / Adrien Hardy), one of the other favourites. They struck out west earlier and it cost them in the ranking for now, but they will be hoping to get the wind shift first and have a better angle.

On Monday, the Class40, Beijaflore, informed its technical team and race management of an injury to the skipper, William Mathelin-Moreaux. On the advice of the doctor of the race, the duo diverted to Lorient where they arrived yesterday afternoon. Mathelin-Moreaux was immediately assessed by the team of Jean-Yves Chauve, the official doctor of the Transat Jacques Vabre Normandie Le Havre, who confirmed that the skipper had a serious dislocation of the shoulder. Marc Guillemot (his co-skipper) and Mathelin-Moreaux have therefore been forced to retire from the Route du Café, in which they had started among the favourites.

Four Class40 have retired from the race since the start on Sunday, leaving 23 boats in the class fleet.

“Alex and Neal are now committed to the western route onboard HUGO BOSS. Over the coming days, it will appear on the race tracker that the boats which took the southerly course are further ahead, ticking more miles off towards the finish line.

“However if we consider the long term effect in the Atlantic, when we look at the weather models the boats to the south could face light upwind conditions over the next 2-3 days, making it harder for them to punch through the trade winds.

“Alex and Neal meanwhile, on the western route, will pass an old dissipating low pressure system and head towards another new system developing off the eastern sea board. By the time they start to head south, towards the trade winds, we’d expect to see them pick up pace and for fleet positions to change.

“It will certainly be a few more days before we see for sure which teams took the right course!

“Onboard HUGO BOSS, Alex and Neal are in good spirits. They both managed to find an opportunity to get some sleep, and both are recharged and ready to tackle what lies ahead of them”.